Pretty dresses are no longer just for women 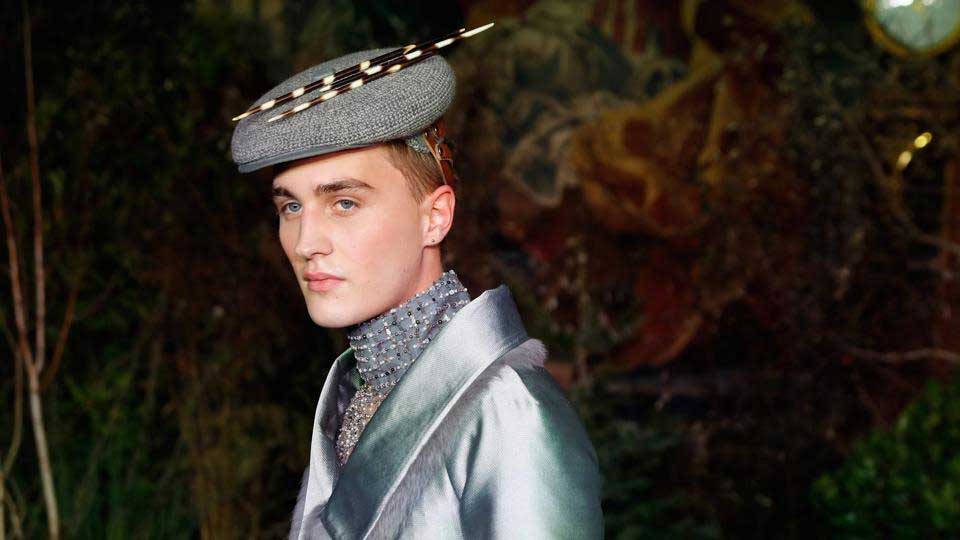 Out to “liberate” men from the straitjacket of convention, designer Alejandro Gomez Palomo dresses up his male models in transparent dresses with plunging necklines, and outfits embroidered with pearls and sequins.

PARIS, Jan 17: Why should women get to wear all the pretty dresses? Why can’t men also flounce about in the feathers, lace or fine embroidery if they fancy?

These are the questions being posed by the daring young Spanish label, Palomo Spain, whose flamboyant show kicked off the Paris men’s fashion week late Tuesday.

Designer Alejandro Gomez Palomo told AFP he wants nothing less than to “liberate” men from the straitjacket of convention. The 25-year-old is one of a new wave of young designers for whom gender fluidity is not just a fashion statement but a way of being.

“Chanel liberated women (after World War I) by dressing them in male fabrics like tweed,” Palomo said. “And when Yves Saint Laurent put women in dinner jackets it was an absolute revolution. I am doing the opposite,” said the Andalusian-born creator, whose men show their legs, wear plunging necklines and silk suspenders and proudly sport transparent dresses embroidered with pearls and sequins.

“It all comes naturally to me,” said Palomo, whose look owes much to the over-the-top world of Spanish filmmaker Pedro Almodovar.

The director’s muse Rossy de Palma has even walked the catwalk for Palomo, who struck gold in July when pop megastar Beyonce wore one of his spectacular flowery dresses to present her newborn twins to her 110 million Instagram followers.

Palomo said his style is about personal “liberation”, and rejects all comparison with a gay or transvestite aesthetic often attributed to him.

“It is just a way of giving guys who might want to, the possibility to wear really sophisticated materials, and certain shapes and silhouettes that used to be associated with women’s wardrobes,” he told AFP before making his Paris debut.

“I am not the first and the only person to do this,” he said, citing Jean Paul Gaultier- who put men in skirts in the 1980s.

Palomo is, nevertheless, the most theatrical and extravagant of a growing wave of designers who are blowing away gender boundaries.

One of the highlights of London fashion week earlier this month was a raucous show by the Loverboy label in which men and women with made-up white faces and blonde wigs heckled the models and swigged wine.

Loverboy designer, kilt- and beret-wearing Scottish rebel Charles Jeffrey, finished his previous show with a man in a princess wedding gown after putting his male models in miniskirts and a woman in a striped business suit.

Like several other young London-based creators, he questions the relevance of gender at all, describing it as a “bit of an eye roll”.

Punk veteran Vivienne Westwood and rising young Turk JW Anderson at Loewe also regularly blur the lines. The movement has already filtered down to the British high street, with big retail chains such as John Lewis and Selfridges experimenting with gender neutral clothing lines for both adults and children.

Palomo, who trained at the London College of Fashion, sees himself as part of this generational shift which refuses to define people in binary terms.

His debut Paris show had all his usual cheeky panache: A line of Renaissance court dandies in silken doublets, dresses and hunting attire, full of delicious double entendres.

It built to a final flourish of imperial camp -- a feathered cape, plumed hat and thigh-high boots with white knickers.

Palomo is far from alone in mining the cross-gender vein at Paris fashion week -- American avant-gardists Thom Browne and Rick Owens are old hands -- and transgender models are now commonplace.

Rather it’s the exuberance of Palomo’s clothes which prompted the French Fashion Federation to invite him into the prestigious Paris fold, the only Spanish designer at style’s top table.

“We want creativity, diversity and a bit of disruption, and he brings the lot,” a spokesman for the federation said.

Palomo’s independence of spirit also extends to where he feels most at home. Instead of one of the big fashion capitals, Palomo has set up his studio in his birthplace, Posadas, a small town of 7,000 people near Cordoba.

Yet he has been dreaming of the Paris catwalk since “I was five years old and making clothes for Barbie dolls. It’s a huge honour for me,” he said. And he hopes his irreverence can put a bit of spark back into Spain fashion, so long dominated by safe mass markets brands like Zara.

“Spanish fashion is a little stuck, a bit rank,” he admitted. “But I have something to bring to the table.”

PM Oli is seeking a vote of confidence today in parliament. Will he survive?
23 hours ago

Bahrain prince and his team successfully scale Sagarmatha
2 hours ago

PM Oli fails to secure parliament’s confidence, what next now?
15 hours ago