Press freedom violations sharply increased in past one year: Report 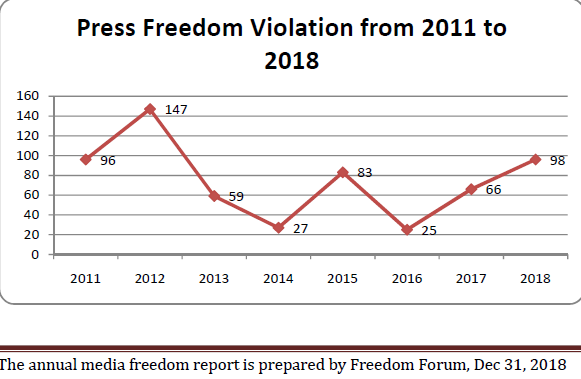 KATHMANDU, Jan 1: A media monitoring report prepared by the Freedom Forum Nepal on Tuesday said that the press freedom violations sharply increased in the past one year.

According to the report, the latest number of violations is the highest in the last six years. "Despite the strong government and attempts for constitution implementation at larger scale, the situation for press freedom in the country deteriorated badly," the report said.

Alleging that the present government is hostile to media, the FFN report has highly criticized the government for its attempts to curtail the press freedom by bringing new laws. "With the installation of new government in February 2018 following the elections in all three-tier of governments as per the federal system, there were expectations that better environment would be offered for media. The scenario, however, was opposite," the report said.

Based on its findings, the organization claimed in the report that there were systematic and planned efforts from the government side to discredit role of media labeling media as ‘false news industry’, and portraying performance in negative light.

"It was worrying that responsible Minister took the lead of this campaign," the FFN said in its report. The report also expressed concerned over the trend of keeping the cabinet decisions secret from reporters. "The government has not only showed non- transparent decision making but also deprived media of their rights to reporting and citizen's right to information," it said.

The organization stated that the top leaders of ruling parties seemed more intolerant to media freedom creating psychological fear amongst journalists. "After the security persons, most of hostile elements are the political cadres. It shows that political parties are yet to instruct their followers to respect press freedom and journalists' rights, and develop political culture," it said.

In the past one year, 16 journalists were threatened by political cadres and local leaders throughout the country. "In the name of 'strong government' which is falsely equated to political stability," the report said.

In this period, 4 journalists were detained resorting to article 47 of Electronic Transaction Act (ETA) though the law is not related to media and journalists, the organization said in the report. In the past one year, the government-owned media faced strict control over the news stories and contents they disseminate, the report said.

"The government-owned media faced strict control over the news stories and contents they disseminate. Pressing these media not to publish the news critical to government was sheer mockery of press freedom," the report said.

KAPILVASTU, Feb 3: Three people have been arrested along with 2.1 million illegal Indian currency from Taulihawa of Kapilvastu. They... Read More...

KATHMANDU, Feb 3: The Supreme Court (SC) has ordered the authorities to present a detailed report on the petition filed... Read More...