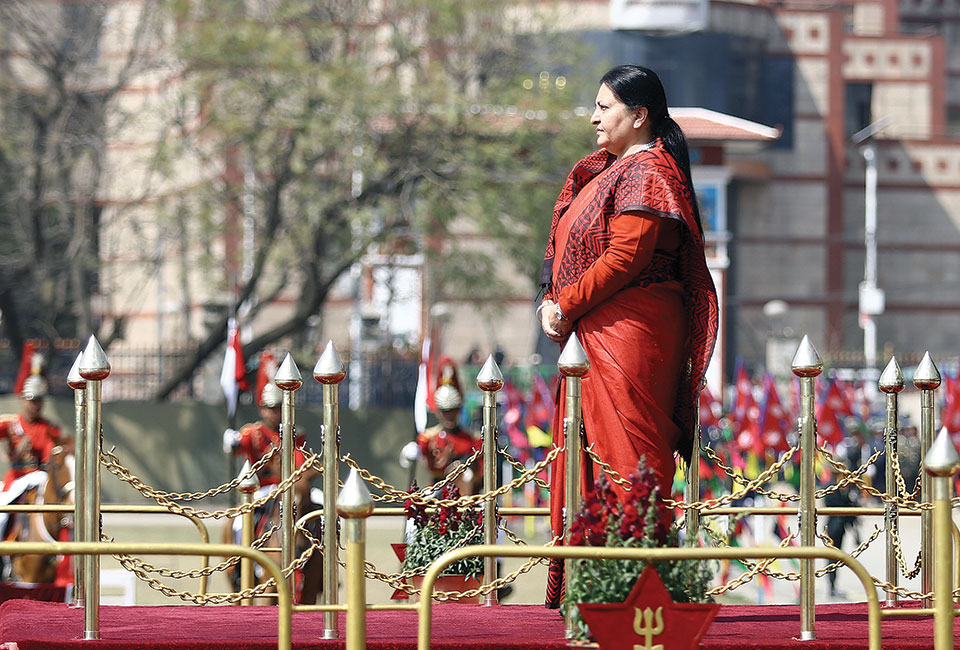 Our President recently made a trip to the United States to attend a high level UN summit and one only hopes, for the sake of the taxpayer contributions used to fund the trip, that something actually materializes out of it. However, the most intriguing aspect of her trip for us common Nepalis was not so much the flight from Nepal to the US but the short trip – well, at least for her – from Sheetal Niwas to the airport.

For the first time in what seems like eternity, traffic was allowed to resume with some level of normalcy during her trip to TIA. Perhaps it was because the departure took place at night or someone within her office realized that they were all being just a bit too oppressive with the security arrangements – but regardless of whatever precipitated it, it was a welcome change.

When Madame President steps out of Sheetal Niwas, it seems like all of Kathmandu should know about it. If you happen to live or work around the Baluwatar area, you would know what I’m talking about. An hour before she is to leave there are traffic policemen for kilometers in the direction of her travel forming what looks like a rather unnecessary guard of honor. Never mind the Bermuda Triangle, just what purpose these bored cops serve is the real mystery!

These security arrangements and the ostentatious motorcade are just some examples of what many ordinary Nepalis feel is a massive waste of state resources on unnecessary pomposity and spectacle. Is it any surprise then that many are comparing the President to the former royals of Nepal?  Even the frequent use of the much loathed Nepali word ‘sawari’ (procession in English) – with its royalist connections – doesn’t really help her cause.

If you were to take a poll of the least popular offices in the land, the Office of the President of Nepal would be somewhere at the top of the pile. And for a ceremonial office, with no direct bearing on the lives of ordinary folks, that is quite an achievement. For ordinary Nepalis, already dealing with the capital’s woes, the President’s movements and the excessive precautions that precede and follow it just adds insult to injury.

Why on earth does traffic need to be stopped half an hour before she arrives and a good twenty minutes after she leaves? It’s like the rest of us have nothing better to do than sit around waiting for our President to pass safely. I mean, we are only going to work and pay taxes – part of which ironically funds all of this extravagance – but I suppose it’s not that important when you compare it to the arduous task of cutting ribbons and inaugurating lifts!

This sense of injustice is further fuelled when ambulances are not let through, buses with school kids returning home are made to wait for hours on end and the public at large (who pay for the roads) is given short shrift by the administration and security apparatus. By now, everyone must have seen the video of people breaking through the traffic barricades simply because they were fed up of waiting. Many of us would have felt that the actions of those motorists were rightly justified, having been in that position so many times ourselves. That video alone should have made the administration rethink their policy on VIP movement and in the case of the President’s more so if this week’s trip to TIA was only thought of as a one-off arrangement.

Although most VIP movements cause disturbances in the capital, the President’s arrangements take it to another level. We are expected to (and most of us do) show deference to positions of public office within reason, but it’s fair to say that the Office of the President and its occupant, including the incumbent and her predecessor, have failed to earn the public’s respect.

While indifference to the position can be attributed to a perceived absence of political neutrality or lack charisma and force of personality among its occupants, the disdain that is prevalent among the populace is simply down to the administration’s insistence on giving the President the ‘regal’ treatment everywhere. This treatment means that the public is inconvenienced beyond a ‘reasonable’ degree and going by sentiments on social media, there is widespread anger just waiting to boil over. Over the long term, as that video showed, this collective anger and defiance will end up being a real headache for the administration if they don’t act on it. Then, maybe we might actually have a need for all that security!

KATHMANDU, May 1: President Bidya Devi Bhandari has expressed her confidence that the stakeholders would focus towards reforming the labour... Read More...