Preserving the purpose in a song 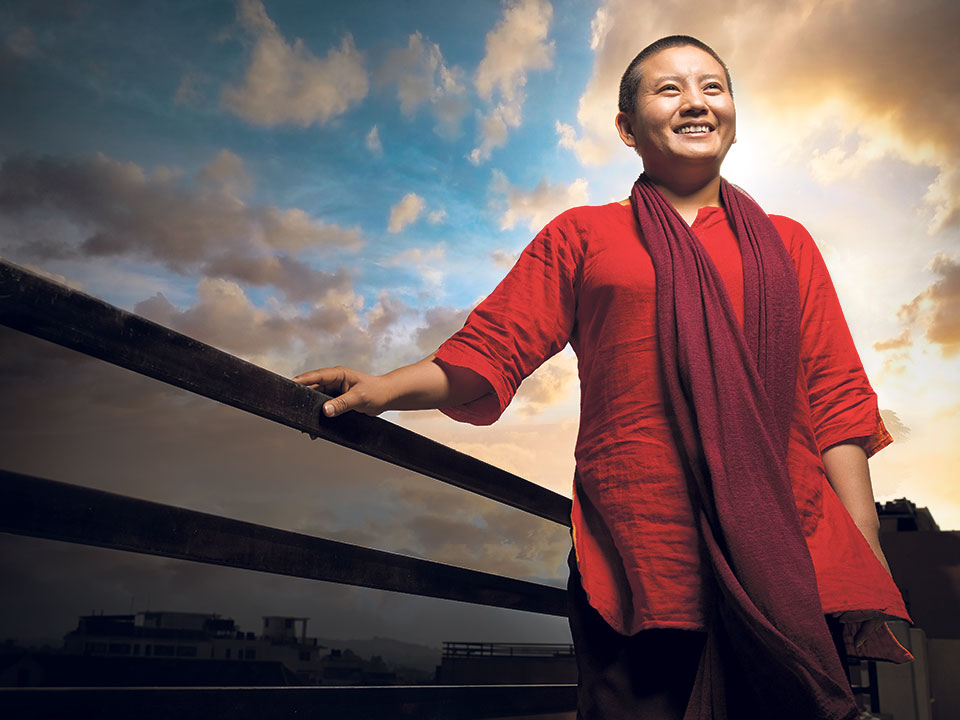 Ani Choying Drolma is currently on a pilgrimage to Halesi Mahadev. The last time we spoke, she was sharing her excitement on the opportunity. Apparently, she had been eager to make a trip to the religious site for years now and she was finally getting a chance. Yes, a large part of the singing sensation's life is still devoted to her spiritual quest. But Ani Choying does a great job of balancing both parts of her world. After returning from the trip, she shares she is scheduled to continue work on her next album. This upcoming effort is actually an international collaboration with the Universal Studios.

In between all this hectic planning though, Ani Choying graciously sat down with The Week to talk about making music as well as quench her fans' curiosity about her playlist.

For the upcoming new music, is your take on spirituality the same or has it, along with the subject of your songs, evolved?
I have been very firm with what I say and think. This was the case in the beginning as well. If I didn't earnestly believe in the words of the song, I didn't sing it. I don't think people would feel the connection to my music otherwise, so I have been clear on my take since my debut effort and it pretty much remains the same.
My beliefs are what give me the strength to concentrate on the message that the songs are trying to relay. I practice these values myself and, even today, I move forward with the experiences from it.

If more people were trying to make the masses more conscious about spiritual aspects of life as well as the importance of it, I think that would be good news for our society.

What is your recording process like?
I actually don't interfere too much in the production process. I respect the creativity of the composers. Where the lyrics are concerned, I share my opinions. I feel blessed to have teamed with Durga dai, my lyricist. He has a great understanding about what I like to share through my music. It's basically about the essence of life, reflections on it and bringing positivity as well. We have a good rapport and the discussions are always fruitful.

You tend to have many performances abroad as well, how do you make sure foreign audience understand your philosophy?
I have never tried to make any extra effort on this regard and, the fact is, it isn't required as well. I’m often surprised myself. It's proof that music is universal. Whether I am singing in Nepali or Tibetan, I find myself being able to communicate the gist of it all. 99% of my audience continues to be foreigners but they express how the songs touched them. It's the power of music, I guess.

Do you have any ritual before taking the stage?
There aren't any particular habits. I don’t eat a lot before performing. I find it difficult to put on a show with a very full stomach but other than that, mostly, I like to be calm and clear in my head. Meditation is the most important thing.

Have you met any other artists attempting to make similar music?
If more people were trying to make the masses more conscious about spiritual aspects of life as well as the importance of it, I think that would be good news for our society. In fact relaying any kind of positive message is a good thing.
Every now and then, I do hear news of monks taking up singing. In China, for instance, I had even met a Tibetan Guru who had started performing. He cited my music as an inspiration. The controversies about monks not being allowed to involve themselves in arts are dissipating and I’m happy about that.

Do you consider yourself a singer/ an artist?
To be honest, I don’t think much about these things. I simply perform when I have to perform. I’m more focused on other work around me. I don’t dwell on the celebrity singer factor.

I think I was around 15 or 16 years old. I had asked a foreigner acquaintance of ours to recommend a few good songs. I wanted to listen to some English music back then and she ended up giving me a Bonnie Raitt tape. For those who don't know, Raitt is an American blues singer-songwriter. She started releasing her music in the 70s but her work has carried on through the decades. Her tune 'Something to Talk About' is still one of my all time favorites. Raitt isn't your typical singer. I’m certainly thankful for the recommendation.

Favorite blast from the past: Tracy Chapman

I have always liked her. I owned her cassettes as well. In my book, she is one singer whose music simply doesn’t get tiresome. You can listen to it all day and then some more. Now the reason for that, I believe, is because her music isn’t only about melodies, there is so much substance in it too. It’s rare to find musicians like her who consistently push social issues through their work. I admire Chapman for that. What’s more, she relayed all those messages with utter class and simplicity. She sang them so naturally.

I don’t exactly remember when his album ‘Ekchin’ was released but I have it in my car and I listen to it frequently whenever I’m driving around town. I really enjoy Nepali songs that have that distinct nepalipan to them. Whenever singers infuse our traditional melodies and instruments in their songs, it’s pretty much a given that I will like them. Ekchin is different because it is an incredibly easy listen. There is a unique simplicity in Bajracharya’s compositions that I really admire. He doesn’t attempt to overdo his vocals either. It’s all just right.

The one love song singer I’m partial to: Whitney Houston

You won’t find me listening to love songs or songs of heartbreak. They have never quiet appealed to me. I still don’t have them on my playlist. However, one of the most memorable songs of my childhood is Whitney Houston’s “I will always love you.” What an amazing voice. And, in this particular single, there is just something incredibly special about the way she has delivered it. You can feel the emotions. There is a lot of honesty in it. It takes what would have been a mere love song to the next level. It becomes so much more meaningful.

I confess I don’t have a lot of time to explore new music or even listen to them on a regular basis. My playlist is pretty old school. You will find a lot of veteran artists on it. In fact Norah Jones is one of the newbies that I really enjoy listening to. People may talk about the likes of Beyonce or Adele but I am still stuck on Jones. Her tunes are melodious and her style is simple yet full of emotions. The combo makes for a very smoothing listen. It’s more my type of music. The loud, aggressive approach that is common among the younger singers isn’t my thing so I stick with the likes of Jones.