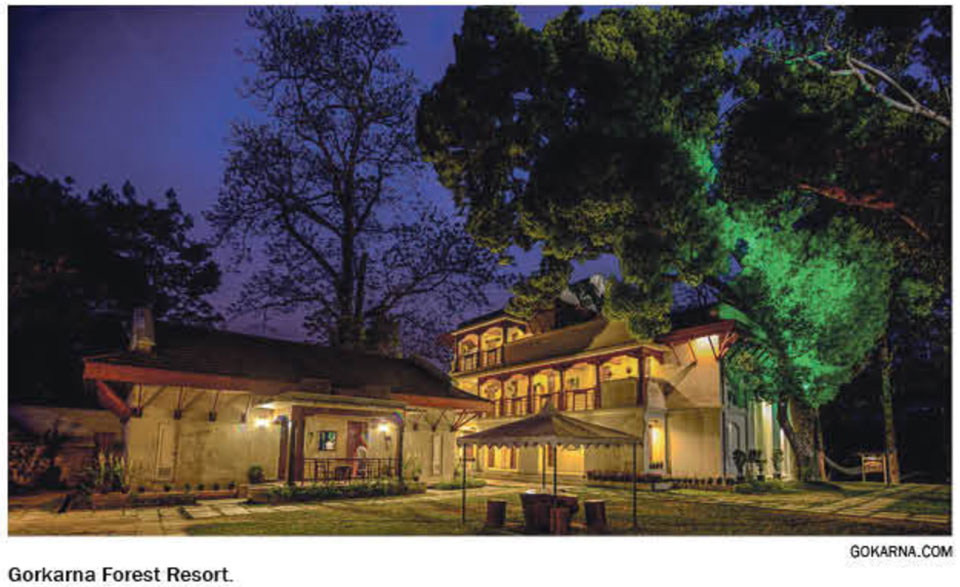 Highly-placed sources close to Deputy Prime Minister and Defense Minister Ishwar Pokharel, who heads the Executive Committee Board of the Nepal Trust, said the lease period of Gokarna Forest Resort is being extended at the personal interest of Prime Minister KP Oli himself.

The Resort owned by Nepal Trust has modern buildings and other facilities across a total 2,792 ropanis of land in Gorkarneshwar Municipality in Kathmandu.

Sources said a meeting of the Nepal Trust Executive Board is being held soon to extend the lease period of the Resort to Yeti Holdings Private Limited, owned by the family of the late Angchhiring Sherpa, who was killed in a helicopter crash earlier this year.

Party insiders say Prime Minister Oli has personal ties with the Sherpa family since the past several years. Sources said Nepal Trust has already prepared a draft contract and the process to extend the lease period would start once the draft is endorsed by the Executive Committee Board.

“A meeting of the Executive Committee Board is scheduled to be held any time soon. Since the meeting is being held to extend the lease , a necessary decision will be taken after the meeting,” said a source familiar with the development.

Secretary at Nepal Trust Gajendra Thakur said he is not in a position to make any comment. “This is an agreement reached during the royal regime. There is nothing I can say about it,” he said.

According to documents availed by Republica, the then Royal Palace had provided in lease the 2,792 ropani of land and resort buildings to LM Suvir Brothers, a sister company of Yeti Holdings, for 30 years beginning August 15, 1996.

Nepal Trust has been receiving Rs 750 per ropani a month from the property. This means the government receives Rs 26.6 million a year.

Many industry insiders argue that this amount is not even five percent of the total revenue Yeti Holdings currently makes out of this prime property.

Senior government officials argue that Gokarna Forest Resort was given in lease at scrap value.

The property belonging to the royal family came under the Nepal Trust after the royal palace massacre in 2001.

Although the government is supposed to open competitive bidding for any lease renewal , officials appear to be maneuvering to extend the lease period to the same company, under the influence of Prime Minister Oli himself.

Amendments made in Nepal Trust Act to extend lease period

It is learnt that the government had brought about amendments to the Act to extend the lease period for Gokarna Forest Resort to Yeti Holdings .

Clause 5 (1) of the Nepal Trust Act states that the property of the Trust shall be utilized in the interest of the nation, which will serve the greater public interest.

However, in the recent amendment, a provision to use the property of Nepal Trust for tourism and entrepreneurship works has been incorporated , apparently to extend the lease held by Yeti Holdings.

Sources said the authorities have been maneuvering to extend the lease period several years before the expiry of the current lease, at the personal interest of Prime Minister K P Oli. Nepal Trust is currently under the Office of Prime Minister and Council of Ministers.

Similarly, the Act has been further amended to pave the way for extending the lease period even before the expiry of the original lease .

Clause 5(3) that bars extending the lease period before its expiry has been amended with a provision to make such extensions if the party using the property wants to invest additional capital to renovate and build new structures and if such an arrangement brings additional economic benefits to the government.

The amendment made recently in the Act also includes a provision to allow the party using the property under lease to submit an application to extend the lease period well in advance.

Those familiar with the development say these amendments were made to secure the extension of the lease period to Yeti Holdings.

Secretaries Removed from Executive Committee Board

Besides making amendments to the Nepal Trust Act, it is found that government secretaries who used to be members of Executive Committee Board of Nepal Trust, have been removed from the Board.

The move came after the secretaries started skipping board meetings, apparently to avoid taking controversial decisions under pressure from the Prime Minister's Office.

The Executive Board originally had the Chief Secretary, Home Secretary, Finance Secretary, Law Secretary, Education Secretary and the Secretary of the Ministry of Women, Children and Social Welfare as members.

Similarly, there was also a provision to have a secretary at the Health Ministry and any four other persons including two women recommended by the government. Sources said all these government secretaries have been removed from the Trust Executive Board except one of the secretaries at the Office of Prime Minister and Council of Ministers, at the direction of Prime Minister Oli himself.

KATHMANDU, Nov 15: In yet another instance of the misuse of political power, a sister company of Yeti Holdings Private... Read More...

KATHMANDU, Feb 25: The government on Tuesday issued a white paper on the movable and immovable properties belonging to the... Read More...