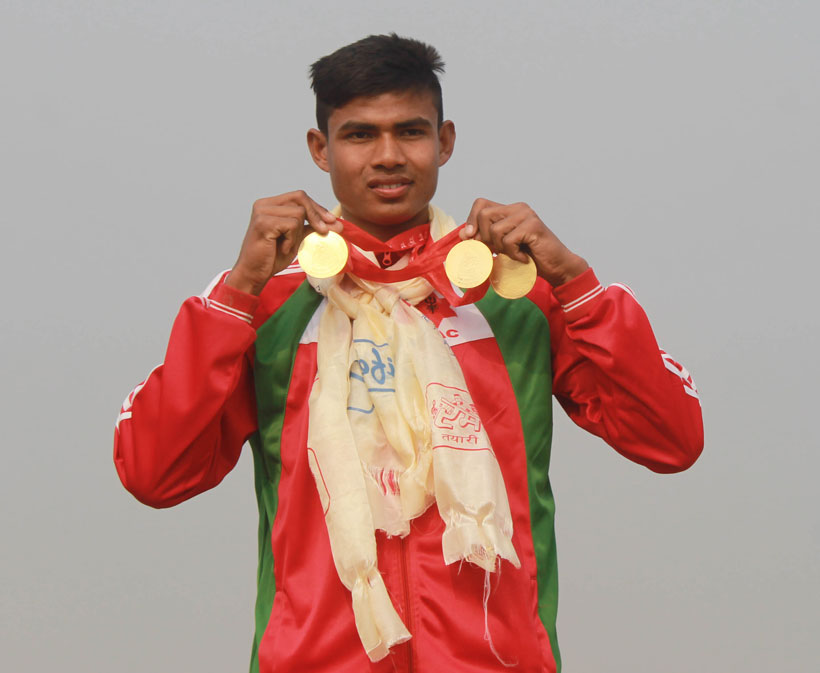 KATHMANDU, Jan 13: Due to poverty, Som Bahadur Kumal couldn’t even afford to buy a marble when he was a child. He used to run for three kilometers to buy marbles as per the request of his friends with the expectation of getting one for his endeavor.

“I never dreamed of becoming an athlete in my childhood days,” said Som, who recently won three gold medals in the Seventh National Games held in Eastern Region. “But running to buy marbles or running with firewood and fodders to reach home faster when I was young might have helped me shape my career in athletics,” said Som.

The 23-year old Army man was declared the best athlete in the Seventh National Games for bagging three medals in 400 meters, 800 meters and 4 X 400 meters relay events for Tribhuvan Army Club. Som joined the army as a non-combatant three years back just to make money in order to look after his family. “As my family’s economic condition was very poor, I was looking for a job so that I could look after my family members. So I didn’t hesitate to take up the lowest position of army,” said Som. However, his efforts to join the army were not easy as he failed three times during the recruitment process. “I was unable to pass the recruitment process thrice for the post of soldier so I applied for the lowest post and I succeed,” added Som.

His athletics journey started when he was inspired to take part in the internal tournament of army by his senior officers. He won gold medals in different events of athletics in the internal tournament held in Western Division of Nepal Army in 2014 and in the same year he took part in the Chief of Army Staff (CoAS) Trophy. Som won silver in 800 meters event of the CoAS which opened door for him to join Army’s sports team, Tribhuvan Army Club, and also received promotion to soldier. A year later, he won silver in the national championship in 800 meters event for the army club finishing second to Mukti Khadka of the same team. The year 2016 was fruitful for Som as he won two gold medals in 400 m and 800 m beating the then national champions Mukti Khadka and Ashish Chaudhary respectively in the national championship. As a result, he received chance to represent

Nepal in the South Asian Games (SAG) and also received promotion in Army. Som, who had joined army service as a private, is now a lance corporal thanks to his good performances in athletics. However, an injury he received after colliding with Asish

Chaudhary during the national championship hampered his preparation for the SAG as he was recommended 20 days bed rest by the doctors. Som, who had set target of winning medal in SAG, was limited to sixth position out of 12 participants in 800 meters event.
Som had set sight on setting new national records in the Seventh National Games but due to unfriendly track he couldn’t achieve the target. “My target was to set new national records in both 400 and 800 meters events but due to poor condition of the track I couldn’t perform in the way I had wanted,” he said.

He gives credit to the army for his development in athletics. “In army, players are given promotion if they perform well and grab medals in domestic and international events. So, everyone trains hard and tries to perform well to get the reward,” added Som. Army became champion in the national games wining 243 medals, including 142 golds.

“We lack proper track to practice, track in Dasharath stadium is in poor condition and it also can cause injury if we practice on it. How can a Nepali athlete win medal in SAG without practicing on proper track?” questioned Som.

He also thinks Nepali athletes lack exposure due to which they cannot think beyond the SAG. “Players need more exposure in order to win medals in SAG,” he added.

He dreams of training kids from his village and help them develop career in athletics.

“There are enough talents in rural areas including my village. We need to nurture them and inspire them to build career in athletics,” said Som.

NEPALGUNJ, Dec 13: There are 24 houses in a row at Ghasiyaran Tole of Nepalgunj Sub-Metropolitan City. The settlement has... Read More...