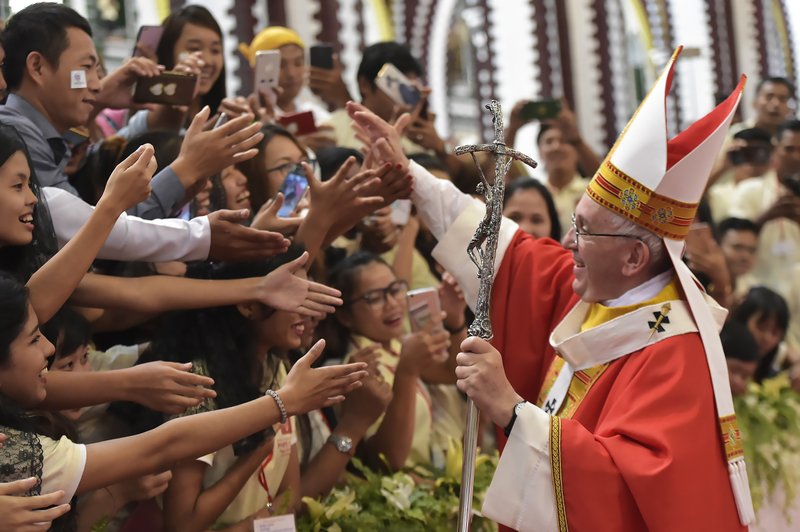 DHAKA, Nov 30: Pope Francis arrived Thursday in Bangladesh for the second leg of his six-day trip to Asia with the Rohingya crisis looming large.

Francis arrived in the capital amid tight airport security and much anticipation. Huge banners with pictures of the pope and Bangladeshi Prime Minister Sheikh Hasina were put up around Dhaka, and St. Mary’s Cathedral was decorated with lights in preparation for his three-day trip to the Muslim majority nation.

Security was a concern after a Christian priest went missing in northern Bangladesh on Tuesday, and his family reported they got calls demanding money. Police said they were looking for the man but would not confirm if it was a kidnapping.

Francis arrived from Myanmar, where he refrained from speaking out about the Rohingya Muslim crisis out of diplomatic deference to his hosts, who consider the Rohingya as having illegally migrated from Bangladesh and don’t recognize them as their own ethnic group.

More than 620,000 Rohingya have fled Myanmar and poured into Bangladesh refugee camps over the last few months, and the issue is expected to take center stage in Bangladesh.

The country’s leading English-language newspaper, The Daily Star, said in an editorial it felt “slightly let down” the pope didn’t mention the crisis specifically while in Myanmar.

“We remain hopeful that given Pope Francis’ legacy of standing up for the oppressed, he will speak out against the ongoing persecution of the Rohingya during this very important visit,” the paper added.

Francis won’t visit the refugee camps while in Bangladesh but he will host an interfaith peace meeting on Friday in the garden of the Dhaka archbishops’ residence, at which a small group of Rohingya is expected.

The Vatican defended Francis’ silence in Myanmar, saying the pope wanted to “build bridges” with the predominantly Buddhist nation.

But human rights groups and Rohingya themselves have expressed disappointment that Francis, an advocate for refugees and the world’s most marginal, refrained from condemning what the U.N. has said is a textbook case of ethnic cleansing.

Vatican spokesman Greg Burke said Francis took seriously the advice given to him by the local Catholic Church, which urged him to toe a cautious line and not even refer to the “Rohingya” by name during his trip to Myanmar.

“You can criticize what’s said, what’s not said, but the pope is not going to lose moral authority on this question here,” Burke told reporters on Wednesday.

Rohingya have faced persecution and discrimination in Myanmar for decades and are denied citizenship, even though many families have lived there for generations. The situation grew worse in August when the army began what it called clearance operations in northern Rakhine state following attacks on security positions by Rohingya militants.

Rohingya have since poured into neighboring Bangladesh, where they have described indiscriminate attacks by Myanmar security forces and Buddhist mobs, including killings, rapes and the torching of entire villages.

Burke stressed that Francis’ diplomatic stance in public in Myanmar didn’t negate what he had said in the past, or what he might be saying in private.

In the past, Francis has strongly condemned the “persecution of our Rohingya brothers,” denounced their suffering because of their faith and called for them to receive “full rights.”

While he called in his first major speech on Tuesday for all of Myanmar’s ethnic groups to have their human rights respected, his failure to specify the Rohingya crisis on Myanmar soil drew criticism from Amnesty International, Human Rights Watch and Rohingya themselves.

On Wednesday, Myanmar Bishop John Hsane Hgyi suggested that reports of atrocities being committed against the Rohingya were not “reliable” or “authoritative,” and that those who criticized Myanmar’s response to a complex situation should “go into the field to study the reality and history” to obtain “true news.”