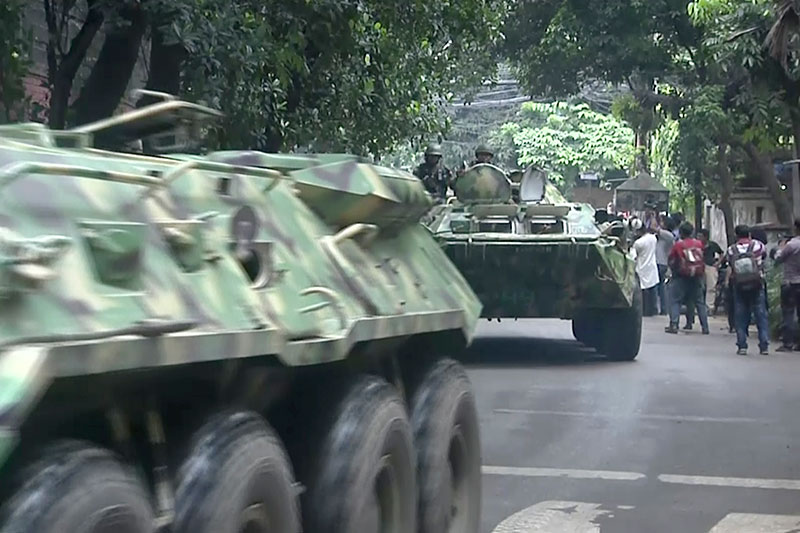 DHAKA, Bangladesh, July 2: Bangladeshi forces stormed an upscale Dhaka restaurant where heavily armed militants held dozens of people hostage Saturday morning, killing at least six of the attackers and rescuing 13 captives including foreigners at the end of the 10-hour standoff. Seven Japanese are unaccounted for.

About 35 people were taken hostage, including about 20 foreigners, when gunmen stormed the Holey Artisan Bakery in Dhaka's Gulshan area, a diplomatic zone, on Friday night.

"We have gunned down at least six terrorists and the main building is cleared but the operation is still going on," Lt. Col. Tuhin Mohammad Masud, commander of the Rapid Action Battalion, told The Associated Press three hours after the commandos launched the rescue operation.

He said there were casualties among other hostages, but did not provide details.

A Japanese government spokesman said that a Japanese hostage was rescued but seven others are unaccounted for. Deputy Chief Cabinet Secretary Koichi Hagiuda said that the eight were together at the restaurant during the attack.

Prime Minister Sheikh Hasina condemned the attack and said security officials arrested one of the militants.

"Because of the effort of the joint force, the terrorists could not flee," Hasina said in a nationally televised speech.

She vowed to fight terrorist attacks in the country and urged people to come forward.

The Islamic State group claimed responsibility for the attack, according to the SITE Intelligence Group, which monitors jihadis activity online. A news agency affiliated with the Islamic Group claimed that 24 people had been killed and 40 wounded, including foreigners, according to SITE. The figures could not be independently confirmed.

The Amaq news agency also posted photos purportedly showing the bodies of hostages. The authenticity of the pictures could not be confirmed either.

With the sound of gunfire and explosions, local TV stations reported that the rescue operation began at 7:40 a.m. It included army personnel with automatic weapons and at least seven armored vehicles and ambulances.

Local media reported that an Argentine and two Bangladeshis also were rescued from the restaurant early Saturday, but details about their condition were not immediately available.

The attack marks an escalation in the growing drumbeat of militant violence to hit the traditionally moderate Muslim-majority nation in the past three years, but with increasing frequency in recent months. Most attacks have been by machete-wielding men singling out individual activists, foreigners and religious minorities.

Bangladesh did not immediately respond to the claim of responsibility by IS, but in the past have denied that the extremist group has a presence in the country. The U.S. State Department said it had seen the IS claim, but could not confirm its authenticity.

The attackers "have not responded to authorities' calls for negotiation," said Masud.

He said that the security cordon would prevent any of the attackers from escaping. Authorities also ordered internet services to be blocked across the country, according to internet service provider Aamra.

Police said the two officers died at a hospital after being wounded in the initial gunfire with as many as nine attackers, who also hurled bombs. Ten of 26 people who were wounded when the militants opened fire were in critical condition, and six were on life support, according to hospital staff. The injuries ranged from broken bones to gunshot wounds. Only one civilian was among the wounded.

The nationalities of the hostages were not immediately clear. On Saturday, Japan's top government spokesman Yoshihide Suga said at a hastily called news conference in Tokyo that the government is trying to confirm that Japanese were among the hostages. Prime Minister Shinzo Abe told reporters that saving lives is the top priority.

Among the hostages was a businessman and his wife and two children, according to his uncle Anwarul Karim.

"My nephew Hasnat Karim called me and said he was inside with his family. He told me, 'Please save us, please!' And he hung up," he said. "We do not know what is going on there."

He said all official American personnel are accounted for with no injuries reported, and the department is working with local authorities to determine if any U.S. citizens and locally-employed staff were affected.

The spree of recent attacks in Bangladesh have raised fears that religious extremists are gaining a foothold in the country, despite its traditions of secularism and tolerance.

Prime Minister Sheikh Hasina's government has cracked down on domestic radical Islamists. It has accused local terrorists and opposition political parties — especially the main opposition Bangladesh Nationalist Party and its Islamist ally Jamaat-e-Islami — of orchestrating the violence in order to destabilize the nation, which both parties deny.