Pokhara-Jomsom flights resume after a week 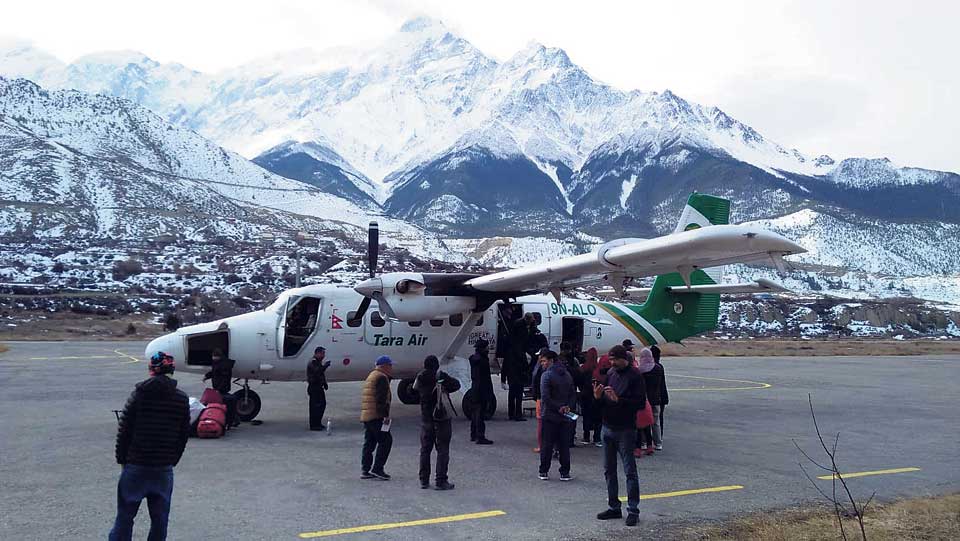 MUSTANG, Feb 14: Flights between Pokhara and Jomsom, which remained disrupted since the past seven days due to heavy snowfall in Mustang, finally resumed from Wednesday.Due to nearly continuous snowfall for a week, the runway of Jomsom airport and surrounding areas saw up to three feet of snow.

Locals estimate that it would take more than a week from now for the snow to fully melt away.According to Jomsom airport officials, an aircraft of Tara Air landed at the airport on Wednesday, which turned out to be the only flight of the day.

The airline also conducted another flight on Thursday.“There has been only one flight per day due to lack of passengers,” said Bhanu Bhakta Koirala, chief of Jomsom chapter of Civil Aviation Authority of Nepal (CAAN).Mustang is experiencing a decline in the number of foreign and domestic tourists especially after the recent heavy snowfall.

During peak tourist season, the airport handles over two dozen flights per day.Caption: A Tara Air aircraft landed at Jomsom Airport on Wednesday.

KATHMANDU, Jan 16: A complaint has been filed against the Dhurmus-Suntali Foundation at the Commission for the Investigation of Abuse of... Read More...