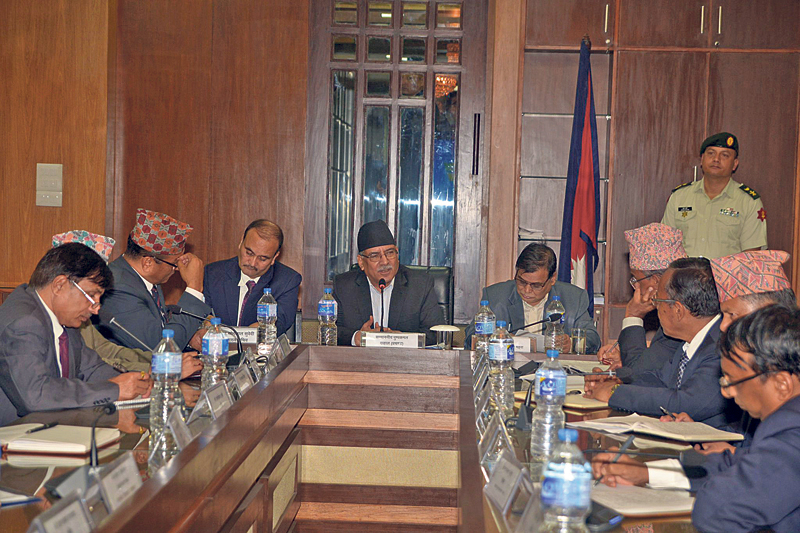 KATHMANDU, Aug 8: Prime Minister Pushpa Kamal Dahal has asked top government officials to work as per a policy of “forgive and forget” when it comes to dealing with cases from the decade-long Maoist insurgency.

“The very spirit of the Comprehensive Peace Accord (CPA) 2006 and the entire peace process that we have adopted is to forget and forgive. But we have also agreed to find the truth and investigate cases of serious human rights violation from the conflict period,” a government secretary quoted Dahal as saying at the gathering of the chief secretary, the secretaries of all the ministries and other top officials held at the prime minister’s office at Singha Durbar, Sunday. “So, you all need to work as per this approach.”

This is the first directive given to nearly three dozen topmost officials by the prime minister, four days after he became head of the government.

This instruction from the prime minister comes at a time when human rights communities within and outside the country have expressed serious reservations over some provisions of the Act on Truth and Reconciliation Commission and Commission for Investigation on Enforced Disappeared Persons. They have said that some of the provisions undermine the rights of the victims.

Dahal, in his recent public speeches, has been arguing that this wasn’t the time to reopen old wounds but to focus the concentration of all political parties on development activities.

During his instructions to the secretaries, Dahal also directed the secretaries and the heads of departments to come up with a clear plan of action to improve the delivery system of government bodies.

“PM Dahal has directed all the ministries to prepare a clear plan with a target and to submit it to the chief secretary within the next three days,” Chief Secretary Som Lal Subedi told Republica.

According to Subedi, PM Dahal directed all the secretaries to carry out result-oriented work, implement the new constitution, effectively conclude the remaining tasks of the peace process, and expedite reconstruction and rehabilitation work in the earthquake-hit districts.

Officials said Dahal expressed dissatisfaction over the slow progress in the reconstruction of structures devastated by earthquake last year. “PM was not satisfied with the reconstruction work,” said a secretary requesting anonymity.

“The prime minister has also instructed us to make all preparations to distribute the first grant installment of Rs 200,000  to earthquake victims for reconstruction.”

The first cabinet meeting on Thursday had decided to distribute the first installment of the housing grant for 533,000 earthquake victims in 31 districts within the next 45 days and expedite the reconstruction task.

“We have very limited time. I need results within this period. If there is any hindrance let me know and I am ready to take necessary steps,” said Dahal.