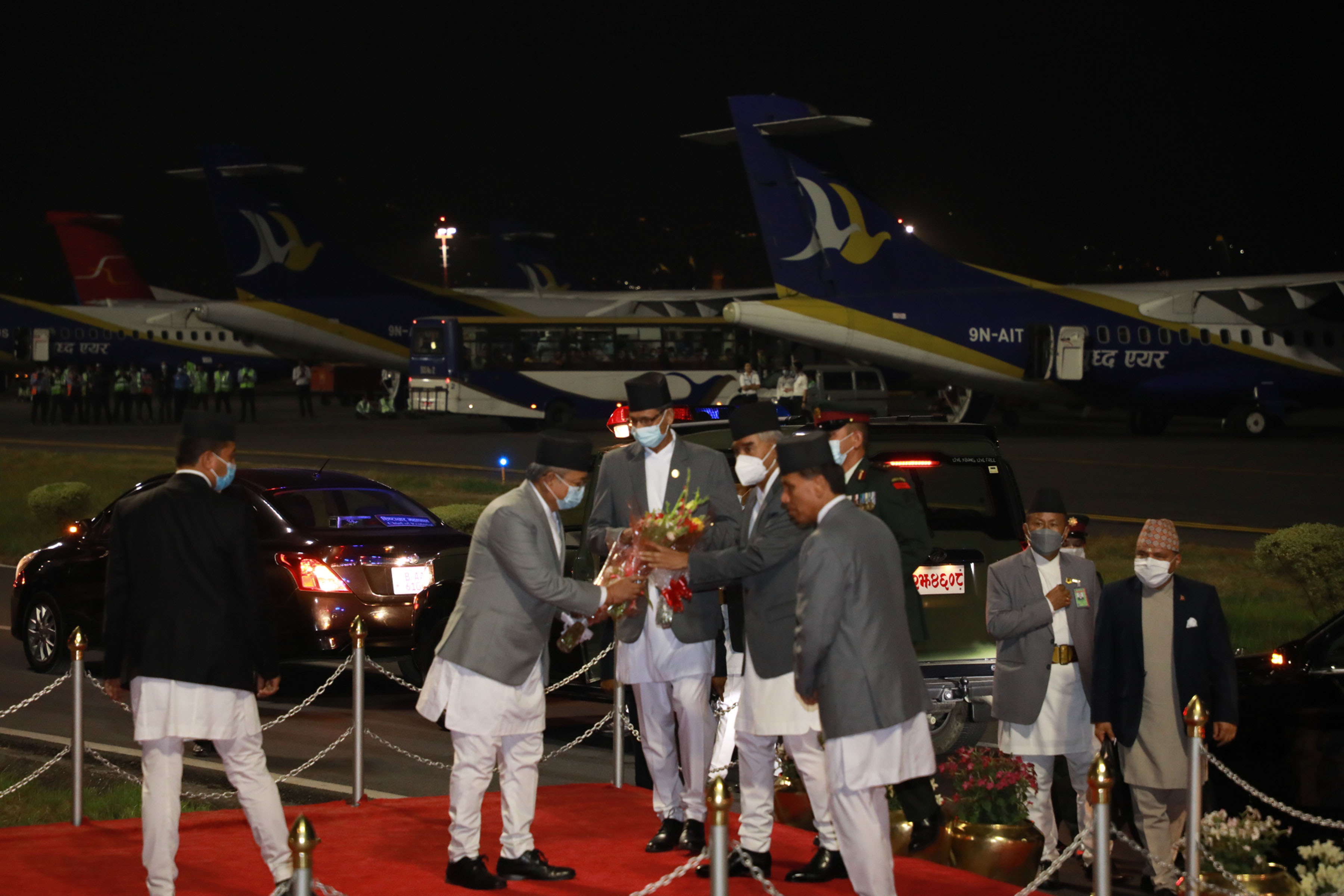 Addressing a press briefing organized at Tribhuvan International Airport upon the arrival of PM Deuba, Foreign Minister Dr Narayan Khadka expressed belief that the bilateral meetings held with high level leadership including Indian Prime Minister Narendra Modi during PM Deuba's three-day visit would further foster cooperation and collaboration between Nepal and India. He informed significant discussions were held during the visit. "PM Deuba and his Indian counterpart Modi held bilateral delegation-level talks at Hyderabad House in New Delhi on Saturday. Indian PM Modi warmly welcomed PM Deuba on his fifth visit to India as Prime Minister of Nepal. The two Prime Ministers recalled their meeting in Glasgow, United Kingdom during the COP26. During the meeting, the two Prime Ministers took a broad overview of Nepal-India relations in all dimensions with a view to further enhancing the close and cordial ties between the two countries," he reminded.

In order for the both countries to cement the longterm cooperation on hydropower, both sides agreed on Nepal-India Joint Vision Statement on Power Sector Cooperation. They discussed promoting connectivity and infrastructure through building of roads, railways, pipelines, transmission lines and air services.

Minister Khadka further shared that Nepal and India exchanged signatures on the following significant documents: MoU for Enhancing Technical Cooperation in Railway Sector; Framework Agreement of International Solar Alliance; Agreement between NOC and IOC for Supply of Fuel for 5 Years and Agreement between NOC and IOC for Sharing Technical Expertise. Similarly, in the presence of both Prime Ministers, there was virtual inauguration of Jaynagar-Janakpur Cross Border Rail Link Project, 132 KVDC Solu Corridor Transmission Line Project, Construction of 132 Health Facilities and Launch of Rupay Card.

During the meeting, the PM Deuba requested the Indian counterpart for the additional air entry routes from Mahendranagar, Nepalgunj and Janakpur. Minister Dr Khadka informed that the Prime Minister of India responded positively to various proposals on development and economic partnership between Nepal and India.

The two prime ministers welcomed the recent signing of an MoU on supply of Urea and DAP from India to Nepal on G-to-G arrangement. PM Deuba requested for the supply of first consignment of 150,000 metric tons of fertilizers to Nepal before the upcoming monsoon season. He thanked his Indian counterpart for India’s support of Covid-19 vaccines, medicines, liquid oxygen and other medical logistics to Nepal.

Prime Minister Deuba also expressed Nepal’s gratitude for India’s support to post-earthquake reconstruction. Matters such as trade and transit, culture and tourism, cooperation in agriculture and sugarcane germplasm, and various other bilateral matters of mutual interests and benefits also figured during the meeting. For the cooperation in the health sector, both prime ministers discussed on developing the JP Koirala National Respiratory Disease Centre of Tanahu as an Academy.

The two leaders discussed the boundary matters. Discussion was held on resolving boundary matters through the established bilateral mechanisms. PM Deuba emphasized the age-old, time-tested and multi-dimensional relations with strong people-to-people contacts said that Nepal attached high importance to its relations with India.

PM Deuba also addressed a gathering of business community in New Delhi organized by Confederation of Indian Industry (CII) and called upon them to invest in Nepal’s productive sectors, particularly in hydropower. A business delegation consisting representatives of private sector apex bodies from Nepal, among others, accompanied the PM.

On the occasion, India requested Nepal to propose new proposals to utilize the unspent amount of USD 500 Million under LOC-IV offer to Nepal. According to Ministry of Foreign Affairs (MoFA), the two prime ministers noted that some landmark projects such as Pancheshwar Hydropower Project have great potentials in accelerating economic and development partnership. Both sides emphasized the need of early finalization of DPR of the Pancheswar Hydropower Project which will lead to execution of the project for mutual benefit.

Four ministers to accompany PM Deuba during his India visit