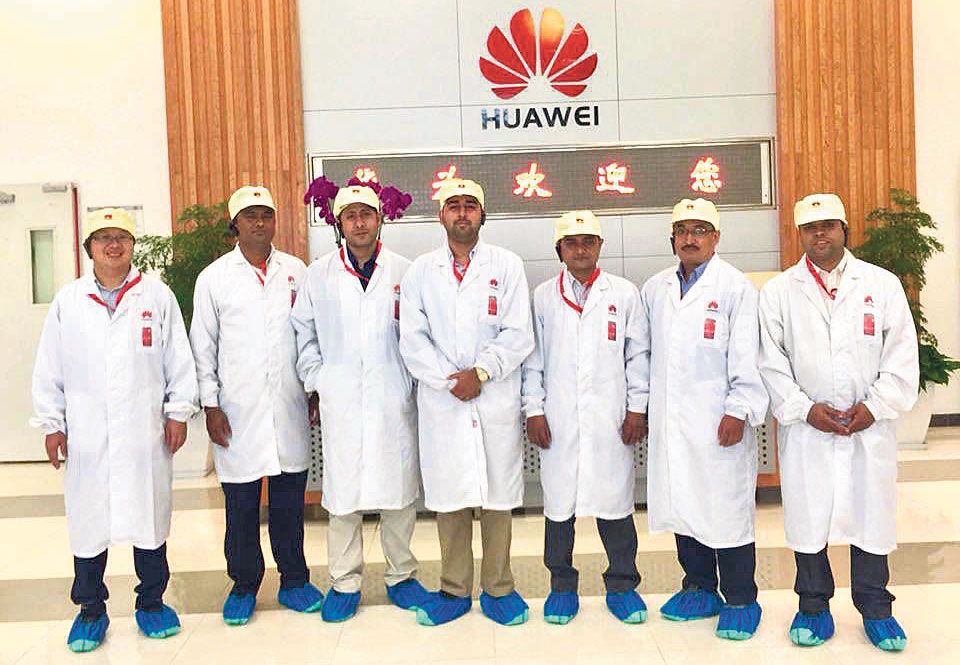 Asgar Ali (third from left) at Huawei headquarters in Shenzhen, China in October.

KATHMANDU, Dec 17: Honorary Information Technology (IT) consultant to Prime Minister KP Oli, Asgar Ali, who is also the chief executive officer (CEO) of eSewa Fonepay Private Limited, has been found to be grossly misusing his position to secure major IT contracts at different government bodies without a competitive bidding process.

It has been found that such IT-related projects are being awarded to private companies of Ali’s choice directly through cabinet decisions, apparently to avoid investigation by anti-graft bodies. As per the existing legal provisions, cabinet decisions do not fall under the purview of the Commission for the Investigation of Abuse of Authority, the constitutional anti-graft body.

A recent example of misuse of power by Ali was the contract awarded to Malika Incorporate Private Limited, a newly set up firm, to print smart licenses through a decision from the cabinet meeting on September 16. No tender bids were invited before awarding the contract.

According to a high-level government official, Ali also insisted on using a low-tech thermal print technology in place of the advanced laser technology in the printing of smart licenses. “The contract was awarded to Malika Incorporate without competitive bidding,” the official who did not want to be named told Republica, “Ali even insisted that the advanced laser technology should not be used in the printing of smart licenses.”

Chief Executive Officer (CEO) of Malika Incorporate Hridaya Kandel argued that the contract was awarded to his company because of their affiliation with the US-based Zebra Technologies. “We have also started negotiations for printing e-passports and identity cards of governmental hospitals,” he said.

Kandel, however, admitted that Malika Incorporate was registered just six months ago in Tikapur and the contract for printing e-licenses was the first-ever contract won by the company.

IT Consultant Ali has also been pressuring various governmental agencies into award their IT-related contracts to the firms of his choice. Ali allegedly managed to get cancelled a tender call for the construction and operation of the ‘Video Forensic System’ of the ‘war room’ at the Prime Minister’s Office (PMO) since the requirement did not match the specifications of the company he favored.

The National Information Technology Center (NITC) had published the call for tender of the project in various media outlets on October 12. But the tender bid was later canceled and the responsibility for awarding the tender was brought under the PMO.

Information officer at NITC, Ramesh Prasad Pokhrel, however, said that since the project involved the PMO, the responsibility for calling tender bids was brought under the PMO. Ali has recommended Chinese firm Huawei and Drishti Tech Private Limited for the project.

It has been found that Huawei in October had sponsored a visit to its offices for IT consultant Ali, computer engineer at the PMO Hari Prasad Pokharel and Kshitiz Rimal, son of the PM’s chief political advisor. Sources claimed that the participation of prime minister’s chief advisor’s son in the China trip along with IT Consultant Ali lends credence to a tacit involvement of Chief Advisor Rimal in securing major IT project without competitive bidding process to certain firms.

A source at the Nepal Telecommunications Authority (NTA) claimed that Ali has also been exerting pressure on the authority to award a contract worth USD 13 million for design, development, establishment, examination, operation and consulting of the Mobile Service Management and Promotion System to a private firm of his choice. “Ali is trying to get the project contract awarded to a joint venture firm, in which he is also involved,” the source claimed.

The source added that Ali has already held several meetings with the Director General of DoI, Ishwar Raj Paudel, apparently to win the contract for the company. “Ali has even told the director general that he will make sure that the cabinet endorses the contract should Paudel support Ali’s company,” the source said.

Former justice of the Supreme Court Balaram KC said the practice of awarding contracts through the cabinet without competitive bidding will yield bad governance and large-scale corruption. “If the bidding process is skipped, then bad governance and corruption will only grow. This will indicate that there is no rule of law in Nepal.”

Similarly, former chief secretary Bimal Koirala claimed that it is clearly stated in the constitution that a consultant cannot exercise power and influence over governmental officials.

He said that Ali in his capacity as an advisor should be making suggestions to the prime minister in areas of his personal expertise. “Even if he mounts pressure on government employees, they should not follow his orders,” he said.

When contacted for his comment on the charges, Ali asked to be left alone and instead challenged Republica to bring a court case against him.

KATHMANDU, April 7: It has been learnt that Prime Minister's Information Technology Consultant Asgar Ali has been promoting his private... Read More...

Concerns over safety of public money, data after F1Soft's intrusion in news website

As eSewa has over 2.1 million customers who park their billions of rupees in the digital wallet, its founder and... Read More...