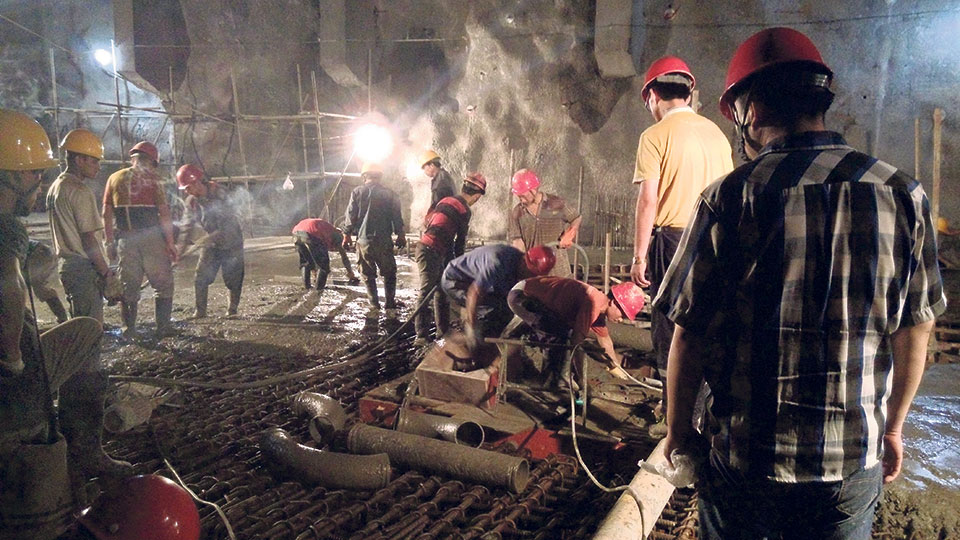 However, despite the PM’s directive, the project is set to miss its own deadline of bringing the 456 MW plant into full operation by the end of June 2019 due to poor access road. The road section from Khadichaur to Charikot met with multiple landslides and other disturbances in the rainy season.

The supply of large-sized penstock pipes to fit in the end of tunnel through which water is passed to the turbines has been affected due to the road condition. The pipes have been stored in Sunkoshi power house area near Khadichaur as it could not to be supplied to the project site, according to UTHL’s officials.

“We may not be able to bring the first unit out of total six units into operation by December as per deadline. We will also not be able to ensure all the plants will start generation by the end of June next year because supply of penstock pipes has been stuck at Sunkoshi power house,” said Ganesh Prasad Neupane, spokesperson of UTHL.

The work of fitting penstock, which was contracted out to Indian company Texmaco Rail and Engineering, has been very slow. The project officials said that they were hoping early repair of the roads to reach to project site that would ensure supply of large-sized penstock pipes once the monsoon subsides.

“We are in coordination with the Road Division Office in Charikot to repair roads after the monsoon recedes,” added Neupane.

The UTHL’s officials may soon sit for revising the deadline of the project. Once it starts generation, the hydropower project is expected to reduce the country’s energy crisis at least for some years ahead, which will significantly lower energy imports from India.

Another reason behind the delay in fitting large penstock pipes is poor performance by the Indian company. The issue was also discussed during the PM’s project site visit in April, and diplomatic efforts were made to sort out the problem thereafter but to no avail. The company is facing problems of internal management.

Neuapne admitted that the contractor had some problems of performance. However, he did not divulge details of the problems, neither did he say anything about the kind of diplomatic efforts made.

It was learnt that the project officials had informed the PM about the Indian contractor’s poor performance, and asked him to take diplomatic efforts with the Government of India to sort it out.

The project timeline was extended by two years due to the 2015 earthquake and subsequent Indian blockade to Nepal. The project officials have estimated the cost of the project to soar to Rs 49.29 billion, up from initial estimate of Rs 35 billion.

KATHMANDU, Sept 23: The Department of Tourism (DoT) has issued climbing permits to a team consisting prince of the Kingdom... Read More...