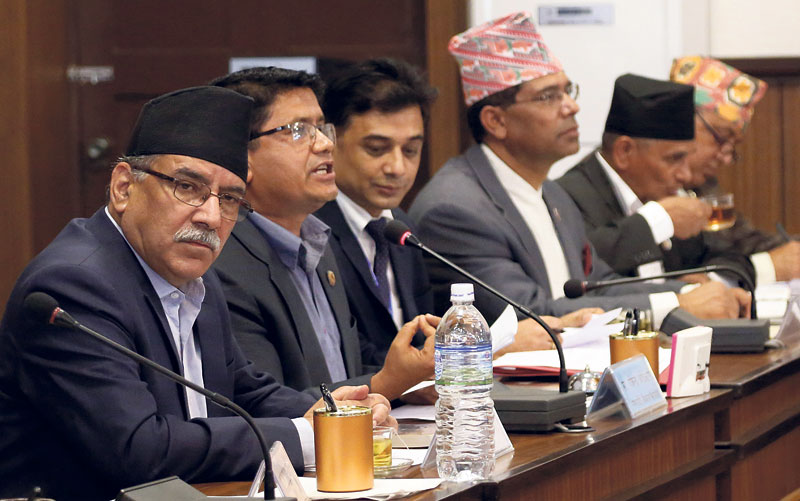 Vows to bring all needed bills in parliament by Sept 16
KATHMANDU, Sept 6: Prime Minister Pushpa Kamal Dahal has made it clear that the government is preparing to hold the local elections in line with the new constitutional provision.

Answering to the questions from lawmakers at the parliament's development committee on Monday, Dahal said that the government has been preparing to hold the local level election by April 2017.

"We should hold the election at any cost in the process of constitution implementation.

The government has been working to draft necessary laws, make a favorable political environment for the elections," Dahal told the House committee meeting in Singha Durbar on Monday.

Dahal claimed that the government will bring all necessary bills in parliament by September 16 for making laws for holding the local elections.

"I have consulted the Election Commission and discussed the needed legal and technical arragements for holding the local elections. The government will complete drafting all needed laws by September 16 so that the commission can hold election by March or April," said Dahal.

Stating that the constitution execution is the top priority of the government, Dahal said that holding elections of all three levels -- local, provincial assemblies and House of Representatives -- is a big challenge.

"Promulgation of constitution itself was a huge challenge but we finally drafted it through consensus among political parties. Now the implementation part is equally challenging," said Dahal.

He added that addressing the demands of Madhesi, Tharu and other indigenous communities is an additional challenge.

"The government has been moving ahead to win the trust of Madhesi, Tharu and other indigenous communities. By developing a national consensus, we should ensure ownership of all communities in the constitution," said Dahal.

As lawmakers strongly objected saying that the 565 local units proposed by the Local Level Restructuring Commission is inadequate, Dahal said that the major political parties should develop a common understanding regarding the issue.

"If political parties can reach consensus, I don't see the commission should have any problem considering increasing the number of local units," said Dahal.

KATHMANDU, Aug 23: At a time when the ruling coalition partner Nepali Congress has been insisting on holding the local... Read More...