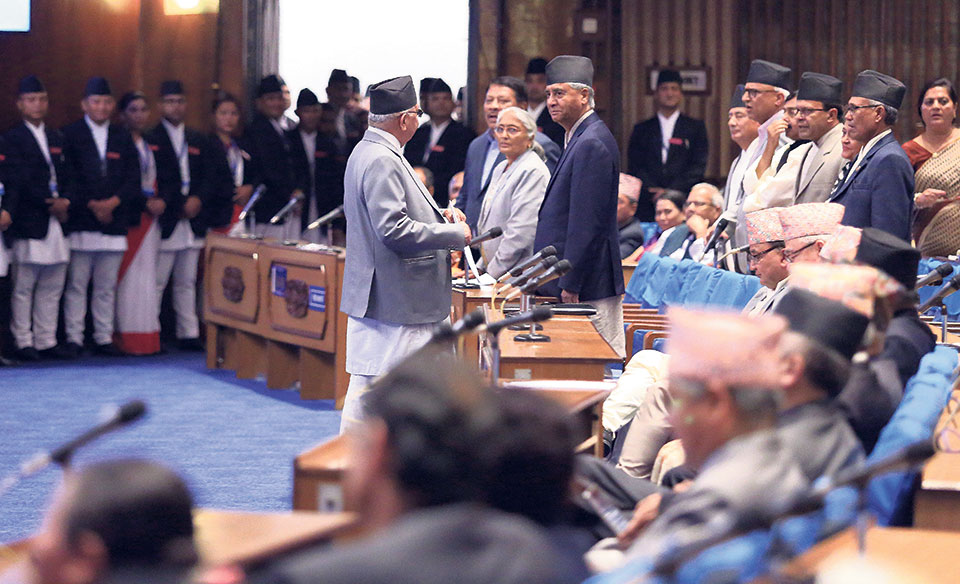 KATHMANDU, May 8: Parliament’s meeting on Tuesday saw heated exchanges between Prime Minister KP Oli and lawmakers from the main opposition Nepali Congress (NC) after the NC lawmakers objected to what they described as Oli’s ‘demeaning remarks’ directed at them.

Shortly after Prime Minister Oli made the ‘demeaning remarks’ from the rostrum, NC lawmakers stood up at their respective seats to object to his choice of words. NC lawmaker Meen Bahadur Bishwakarma expressed objections on behalf of the opposition party, accusing the prime minister of belittling the opposition lawmakers just for raising questions over the government’s doings.

The prime minister then answered again, clearly showing displeasure. “I am here at the rostrum to answer questions but there should be a certain limit and proper decency should be maintained while asking questions,” he said, visibly angry.

According to lawmakers from the ruling party, Prime Minister Oli got angry after NC lawmaker Biswakarma asked if he was poising himself for huge corruption in bringing in projects worth over Rs 25 billion under the jurisdiction of the Prime Minister’s Office.

Even as Oli failed to satisfy the NC lawmakers, Speaker Krishna Bahadur Mahara instructed him to go ahead with his response amid the protest. NC lawmakers then vented their ire against Mahara and accused him of taking the government’s side in not instructing the erasure of Oli’s objectionable remarks from House records.

In a rare instance inside parliament, Mahara continued with House business amid the obstructions from the main opposition party. Interestingly, NC lawmakers also took part in the proceedings amidst their own obstruction.

Although NC continued its protest in the House over Oli’s remarks, both houses of parliament endorsed by majority votes the policy and program presented earlier by President Bidya Bhandari.
Speaker Mahara has scheduled pre-budget discussions in the lower house for Friday as the government plans to present the budget for the fiscal year 2019/20 on May 29.