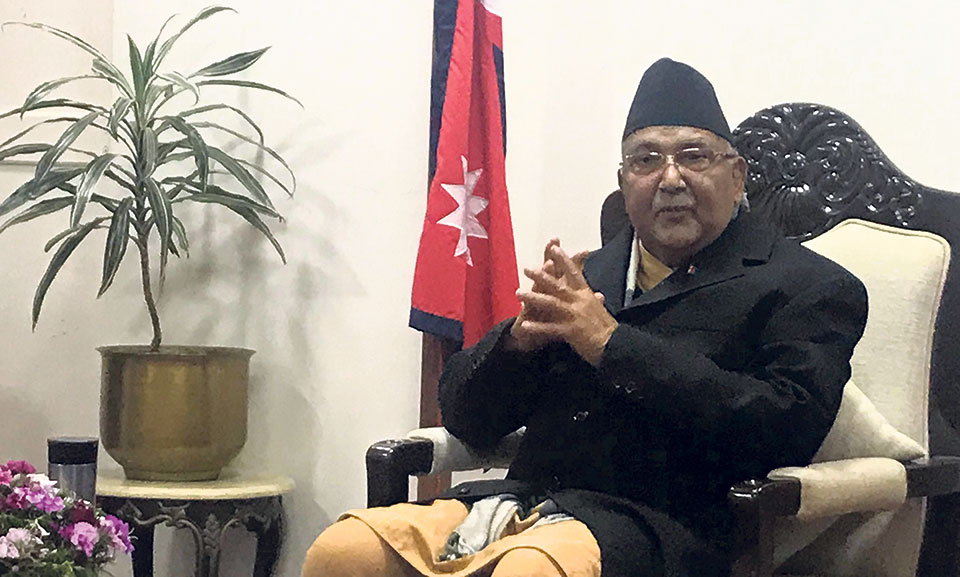 KATHMANDU, Feb 28: Eight days after his trusted cabinet colleague Gokul Baskota was forced to resign over allegations of involvement in a huge bribery case, Prime Minister KP Oli on Thursday came to the sacked minister’s defense, saying accusations against him have not been established.

Baskota, headed two ministries – Ministry of Communication and Ministry of Urban Development – has been accused of bargaining for a kickback of Rs 700 million from a Swiss company for a contract to procure a security printing press for the government.

In his first public comment on the much-talked-about Swiss connection, Oli said the accusation against Baskota has not been established. He claimed that Baskota had been framed.

Oli termed as baseless the complaint registered at the anti-corruption watchdog CIAA. “He has been denying any involvement and the accusation has not been established. The Swiss embassy has termed it [accusation] fake,” said Oli while addressing a Bagmati Province-level gathering of party cadres in Kathmandu. “He has already resigned after the accusation and there was no need for publicity overkill as though there has already been a conviction.”

The prime minister further said the complaint registered at the CIAA was baseless. “Does such a complaint make any sense? The complaint itself smacks of corruption.”

Although the CIAA has already taken up the bribery case, Oli declared that recording the audio was a childish thing to do. He also threatened to take action against the person who recorded it.

Bijaya Prakash Mishra, a self-styled agent of a Swiss company who was into dealings with the government over procurement of the security printing press, had recorded the audio and leaked it to media after he failed to bag the procurement contract. In the audio, Baskota is heard seeking a Rs 700 million cut in the purchase of the security press with its price tag of some Rs 27 billion.

Baskota is heard suggesting the agent increase the price by one billion so that he could get a bigger kickback.

“A childish individual recorded the [audio]. There was no deal at all,” Oli said, claiming that such a thing was done to weaken the ‘movement’.

The government has come under sustained flak after the bribe case got exposed. Leaders within the ruling NCP and beyond have even questioned whether Oli himself did not have a hand in staking out the Swiss company. They argue that Baskota acting alone couldn’t have dared to attempted such a huge killing.

‘Will return to work 5 days after kidney transplant’
Oli, who has turned defensive in recent days after failing to deliver as expected or manage growing dissatisfaction in the party, asked party cadres not to worry about him. He claimed that despite being a kidney patient he has been working 18 hours a day and there was no need to regard him as physically weak. He told them to worry not about his state of health.

“I’m going for a kidney transplant soon. I will rest four days in hospital after that and will be back at work on the sixth day,” he said adding, “After that, nothing will happen to my health for 15 years.”

Minister Baskota himself acted as agent in procurement