During the meeting, the two Prime Ministers exchanged views on maintaining the momentum generated in the recent past and expressed commitment to taking the bilateral relations to a new height, according to a press release issued by Nepali Embassy in New Delhi.

"Oli congratulated Modi on his assumption of office for the second term as well as for the grand electoral success of Bharatiya Janata Party and the National Democratic Alliance in the recently held Lok Sabha elections. He extended best wishes for the successful tenure of office of the Prime Minister of India," read the press release.

On the occasion, Modi thanked the Oli for accepting the invitation and participating in the swearing-in ceremony.

"Both Prime Ministers expressed happiness over the progress made in Nepal-India relations under their respective leadership," read the press release. 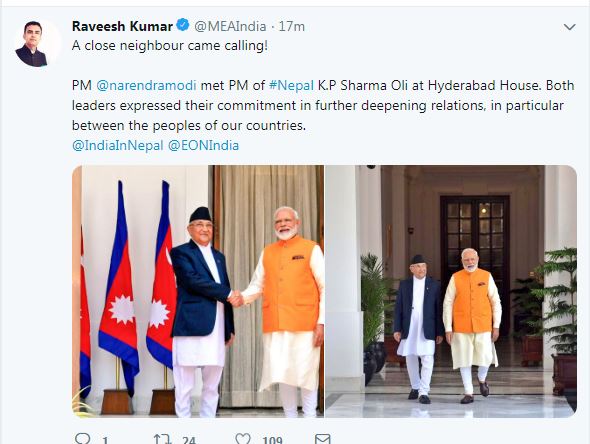 The two leaders underlined the importance of the regular exchange of high-level visits between the two countries in order to further strengthen bilateral ties and advance cooperation in all possible areas for the mutual benefits of the two countries.

Oli conveyed the cordial invitation extended by President Bidya Devi Bhandari to the Indian President for State Visit to Nepal.

Oli also extended an invitation to Modi to pay a visit to Nepal, which Prime Minister of India accepted with pleasure, according to the press release.

During the meeting held at Hyderabad House in New Delhi, the two leaders expressed their commitment in further deepening relations, in particular between the peoples of our countries, according to India's External Affairs Ministry.

Oli attended Modi's swearing-in ceremony at a function held at the forecourt at the Indian President's Office. President Ram Nath Kovind administered the oath of office to Modi and other Ministers. 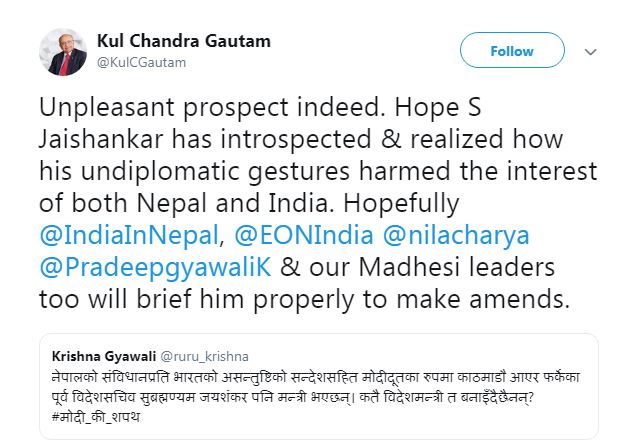 Following the swearing-in ceremony, Prime Minister Oli attended the banquet hosted by the President of India in honor of the invited Heads of State, Heads of Government and other dignitaries.

Modi took oath for the second time after a spectacular victory in the national election a week ago.

Over 50 ministers joined Modi in the swearing-in held at the Indian President's Office in the presence of 8,000 guests including world leaders, dignitaries, politicians, celebrities and industrialists, according to NDTV Online.

Modi, 68, walked to the podium for his oath to chants of "Modi, Modi" from the audience. The two other Indian leaders who were cheered loudly by the crowd were Amit Shah and Smriti Irani.

Amit Shah, who is credited with leading the BJP to magnificent victories in election after election, is the most prominent newcomer in Modi's second government.

Narendra Modi thanks Nepali leaders who congratulated him on election victory

KATHMANDU, May 24: While thanking the ruling and opposition party leaders of Nepal for their congratulatory messages on his re-election,... Read More...