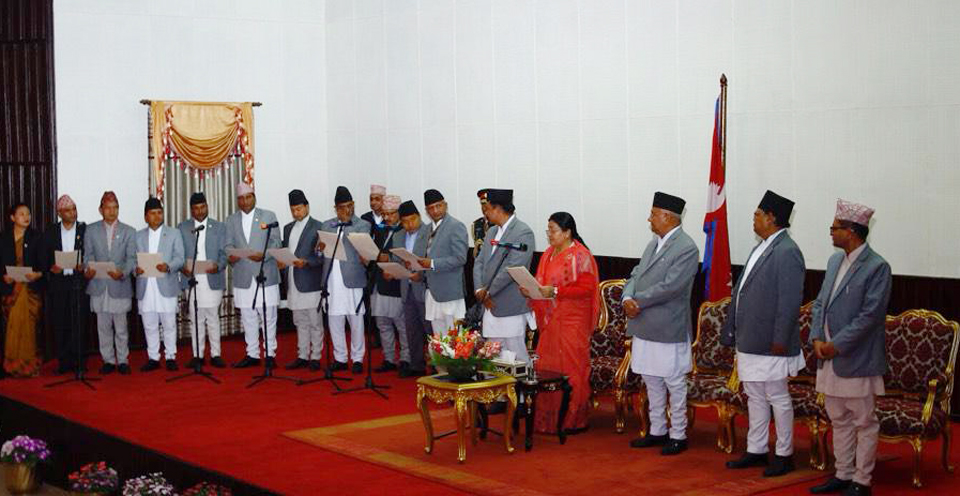 Prime Minister Oli has transferred Lalbabu Pandit from the Ministry of Environment to the Ministry of General Administration on Friday. Minister Pandit during his last stint as minister for general administration had been applauded for his campaign against civil servants holding permanent residency in foreign countries.

However, UML Secretary Yogesh Bhattarai, who also heads the party’s Publicity Department, could not be accommodated in the latest cabinet expansion despite Oli’s promise. During the election campaign in Taplejung, Prime Minister Oli had promised to make him minister if people in Taplejung voted Bhattarai to victory.

Earlier, Minister Khatiwada and Thapa were inducted to the cabinet as new faces from the UML. Khatiwada, who worked as economic advisor to the UML, previously served as governor of Nepal Rastra Bank.

Similarly, Ministers duo Khanal and Magar and state minister Chaudhary are among the new faces in the cabinet from the Maoist Center. While Magar is the daughter-in-law of Maoist Center Chairman Pushpa Kamal Dahal, Khanal served as commander of the Maoist ‘people’s liberation army’ during the insurgency.

Sources said Prime Minister Oli has kept for himself the Ministry of Health and Population and Ministry of Urban Development as the two ministries have been set aside for Upendra Yadav’s Federal Socialist Forum (FSFN), which has yet to join the government.

Prime Minister Oli has promised three ministers including one state minister to the FSFN. Oli cabinet will get full shape only after FSFN  joins the cabinet.

Party insiders said Yadav, who is also joining the cabinet, could not become part of Friday’s expansion as the FSFN awaits a formal agreement on its demands including constitution amendment with the government.

Differences have also surfaced in the party over its ministerial candidates. The party has made an understanding to send Chairman Yadav and leader Renu Kumari Yadav as ministers and Rajendra Shrestha as a state minister. A section of FSFN leaders is against sending Shrestha to the cabinet.

Senior RJPN leaders including Mahantha Thakur and Rajendra Mahato had visited Baluwatar to request the prime minister to release Resham Chaudhary, the main accused in the 2015 Tikapur massacre who is currently in judicial custody, and allow him to take oath as parliamentarian, besides a pledge of constitution amendment.

Three ministries added
Earlier in the morning, the ruling CPN-UML and CPN (Maoist Center) had agreed to create three additional ministries to settle power-sharing deals among coalition partners.
The number has now reached to 21 including the Office of Prime Minister and Council of Ministers.
The number of ministries was reduced to 17 from the existing 30 ministries shortly after Prime Minister K P Sharma Oli assumed his office. A High Level Administrative Restructuring Commission had suggested keeping only 15 ministries including the PMO in the federal government.

The Ministry of Youth and Sports was formed after breaking down the existing Ministry of Education, Science Technology and Youths and Sports. Similarly, Ministry of Labor, Employment, Women and Children was broken to form a new ministry.
All new ministers assumed office on Friday itself.