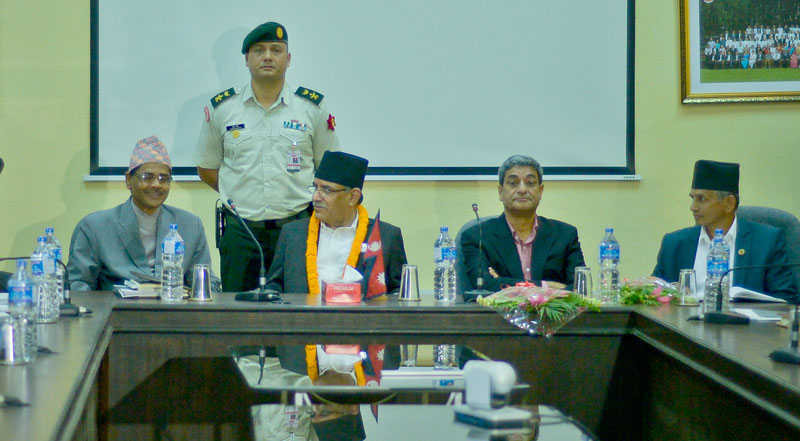 The constitution has stipulated that Nepal would hold the elections of local, provincial and federal levels by mid January 2018.

Holding a meeting with the Chief Election Commissioner and other officials at the Commission on Sunday, Prime Minister Pushpa Kamal Dahal said the government was striving to create the atmosphere conducive for the elections by formulating necessary laws and holding talks with the agitating political parties.

On the other hand, the Madhes-centric parties have been demanding amendment of constitution, showing discontents on number of provinces and delineation.

During the discussion with the EC officials, the PM informed that the local body restructuring commission has been asked to submit its report within mid October. The date for the election could be fixed four months before the elections, he added. But, the

EC demanded at least six months before the election to fix the date.

According to the PM, the major political parties could forge agreement on the threshold.
During the visit, PM Dahal also inspected the EC office.

Moreover, Minister Lekhak said government would not budge from its commitment. He urged the EC to prepare a checklist of the activities the government and EC should carry out regarding the elections.

During the meeting, Chief Election Commissioner Dr Ayodhi Prasad Yadav informed the high level team that nine laws were necessary to hold the elections. Although agreement in principle was made on some Acts, some drafts sent to the Home Ministry, were yet to be tabled before the parliament. But, the government was delaying responses on it, he complained.

Dr Yadav further said EC should be allowed to purchase necessary materials not based on Public Procurement Act but on other election related laws.

It is noted that the posts for three commissioners at EC are still vacant. RSS