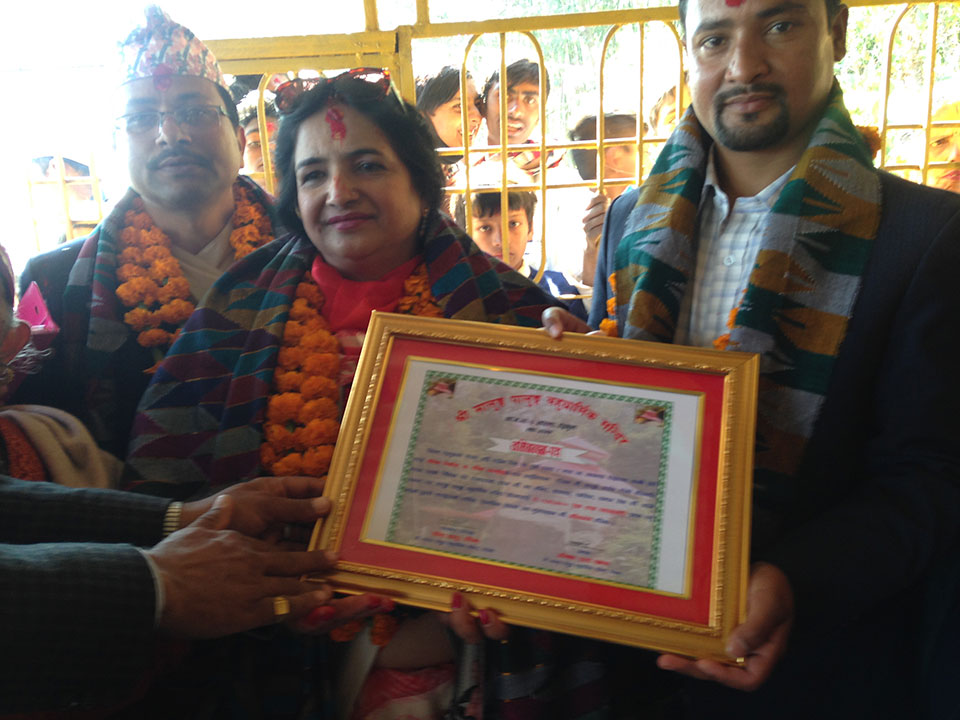 TEHRATHUM, Jan 24: Radhika Pokharel, who is known to many of us as a Good Samaritan, has pledged Rs 1 million in charity for the construction of a library building.

Philanthropist Pokharel announced this donation at a reception organized by Myanglung Campus in the district headquarters Myanglung on Wednesday.

Pokharel, who has already helped out to set up a revolving fund of Rs 1,011,111 at the campus, is going to donate the aforesaid amount for the construction of a library building for Myanglung Campus, said Assistant Campus Chief Prakash Dhungana.

Similarly, Jirikhimti Chapter of Nepal Red Cross Society has felicitated Pokharel for her selfless philanthropic job.  Speaking at the program, Pokharel pledged Rs 111,111 to the society, Rs 150,000 for Pataleshwar Temple and Rs 111,111 for the construction of Brishanti Sthal (resting shelter).

Ratna Secondary School based at Solma in Laligurans Municipality has feted Pokhrel during a stage inauguration program to which she had contributed Rs 500,000.

During the program, they were honored with Dhaka topis (caps), shawls, garlands along with a letter of facilitation, said school principal Ambika Prasad Khanal.

With Rs 17.5 million already donated in social work, Philanthropist Pokharel had constructed a house for Maya Gyawali,  wife of late Jibraj Ashrit, at the cost of Rs 2.9 million.

Pokharel has been living in Australia as a migrant worker since last one decade.