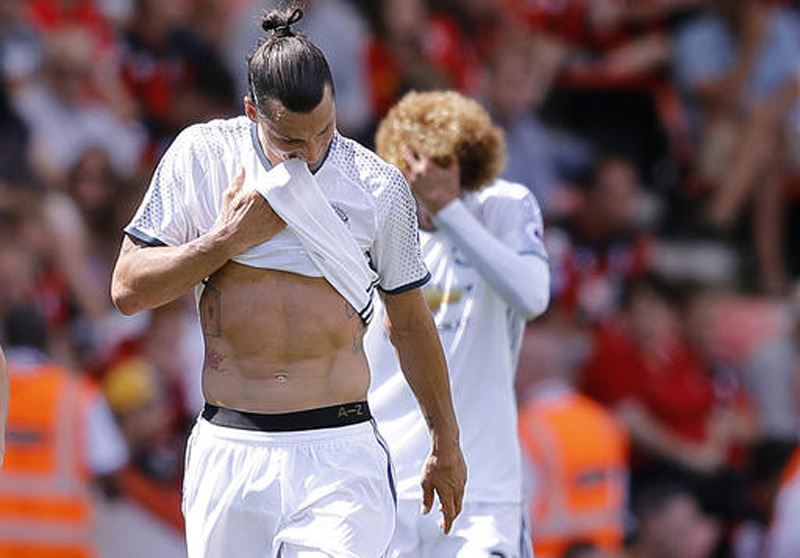 MANCHESTER, Aug 15: Zlatan Ibrahimovic is garnering quite the fan club in the Manchester United canteen since his offseason move to Old Trafford.

United's youngsters — Luke Shaw and Marcus Rashford among them — sit with the 34-year-old striker at meal times, looking to extract as much wisdom as they can from one of the superstars of world football.

Ibrahimovic's influence is also showing on the field at his new club. He joined after four hugely successful seasons with Paris Saint-Germain.

A goal from a bicycle kick four minutes into a friendly match in his first appearance in the famous red shirt. A late winner against Leicester in the Community Shield, the annual curtain-raiser for the English season at Wembley Stadium. And, on Sunday, a goal on his Premier League debut — a long-distance strike that garnished United's 3-1 win at Bournemouth.

It's becoming increasingly clear why Jose Mourinho was intent on making the Swede a key part of his first year at England's biggest club.

That's something of a stretch — Ibrahimovic might have been at his best during spells in Italy with Inter and AC Milan and with PSG last season — but he is certainly going to be a valuable member of United's squad if his start to the season is anything to go by.

Handed the No. 9 shirt worn last season by Anthony Martial, Ibrahimovic has displaced Rashford from the starting lineup and given United a different kind of presence up front to the pacey England international. His strike partnership with Wayne Rooney lacks pace but is certainly not lacking in technique, game intelligence and physicality.

There were signs, especially early in the second half, against Bournemouth of things clicking in United's attack and there's still Paul Pogba — the world's most expensive player — to come into the midfield.

Ibrahimovic has now scored on his debuts in the Italian, Spanish, French and English leagues, as well as in his first Champions League match. Mourinho said the striker will be "phenomenal" for United and the Premier League as a whole, and doesn't understand how Ibrahimovic wasn't able to break the dominance of Cristiano Ronaldo and Lionel Messi in voting for FIFA's world player of the year.

"The Golden Ball was there but it was always going to two guys with a better political entourage," Mourinho said to the BBC. "It's incredible how this man (Ibrahimovic) never won the Golden Ball. But at this moment in his career, he wants to win the Premier League, not the Golden Ball."

Ibrahimovic left a huge impression on French football, becoming one of the finest foreign players to have graced the French league. He became PSG's all-time leading scorer with 156 goals in 180 games, including a career-high 38 in the league and 50 overall last season.

After scoring twice in his final PSG game, a 4-2 win against Marseille in the French Cup final, he said "I came, I saw, I conquered."

It was a typically immodest statement. But Ibrahimovic was truly an inspirational figure for PSG, inspiring not only young players but most of the squad with his determination in training, the commitment he showed and his ferocious will to win.

Ibrahimovic's influence at United is already being compared to that of Eric Cantona's. Cantona was known as the "King" of Old Trafford and Ibrahimovic — a man never short of self-belief — said he will be a "god" there.

For the moment, though, he is still adapting to life in England.

"It's not easy," he said. "Everything is new for me: my team-mates, the club, the environment, new stadiums but slowly I get settled in, play my game and help the team win. We want to continue like that."

An injury to influential striker Zlatan Ibrahimovic will be disastrous for Manchester United, according to manager Jose Mourinho, who is... Read More...

KATHMANDU, Aug 30: Most of us make bad decisions every day. We eat too much despite being full, we spend... Read More...