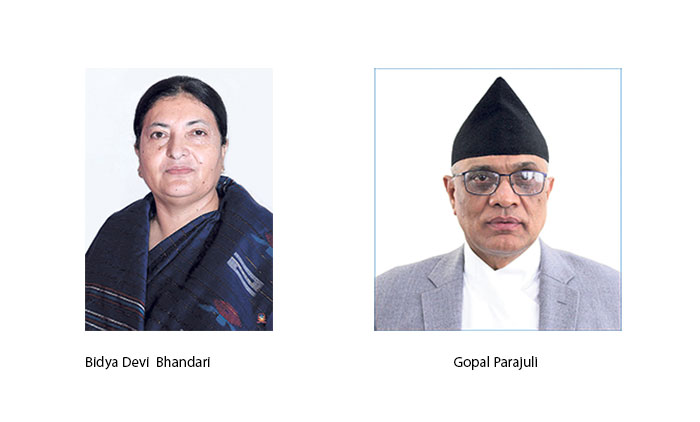 KATHMANDU, March 29: Challenging the legality of the oath of office administered to President Bidya Devi Bhandari by the then Chief Justice Gopal Parajluli on March 16, a writ petition has been filed on Wednesday seeking the apex court to prevent Bhandari from acting as the head of state.

Immediately after registering the petition, the apex court administration has scheduled the initial hearing on the case for Thursday.

Claiming that the oath administered to president by CJ Parajuli, who had alreday been relieved of the post by the Judicial Council, was unconstitutional, the petitioners have sought the apex court to bar Bhandari from continuing her duties as the head of the state until she takes fresh oath from the legitimate chief justice.

A day after apex court justice Ishwar Prasad Khatiwada ordered the court administration to accept the petition, the petition was formally registered Wednesday. Earlier the court's registrar had refused to register the petition.

The petition was lodged by advocates duo Hemmani Subedi and Narayan Kharel.

According to apex court's media expert Kishor Paudel, the administration scheduled the petition for initial hearing for Thursday. The petitioners, in the petition claimed that the oath administered by the relieved CJ Parajuli was extreme violation of the constitution and immoral because he did not have such authority to administer the oath to the president.

Parajuli had resigned as chief justice on March 15, a day after administering the oath to President Bhandari even though he had received the letter from the Judicial Council on March 14 itself stating that he was due for retirement seven months ago.

The petitioners also sought the apex court order to the Constitutional Council headed by Prime Minister KP Sharma Oli to immediately initiate process for the appointment of new Chief Justice.

KATHMANDU, April 2: The Supreme Court has ordered the state authorities to furnish documents related to the oath of office and... Read More...

TUTH will continue to provide health insurance coverage
45 minutes ago