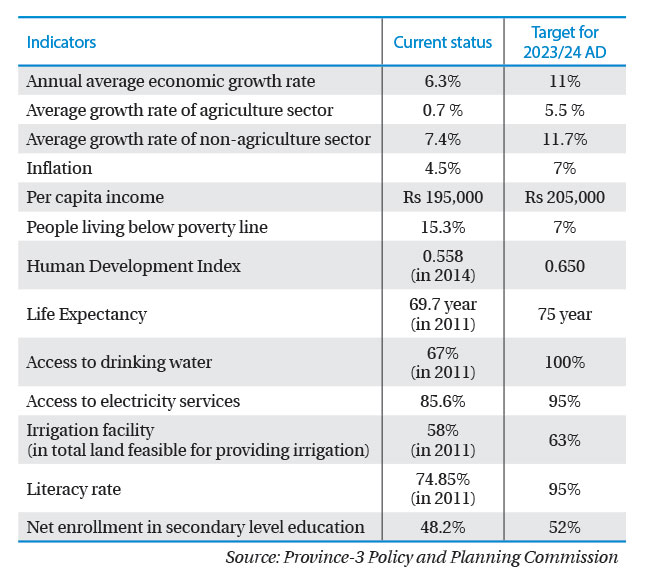 KATHMANDU, Dec 29: Average earning of the people living in Province 3 will be more than double of today in five years’ time, going by the targets of the Province Policy and Planning Commission.

The per capita income in the province is Rs 195,000 as per the data of current fiscal year.
The plan has also aimed at reducing the number of people living below poverty line to 7 percent from 15.3 percent by the end of periodic plan, according to a press release issued by the commission on Friday.

To achieve a high growth in per capita income and meet the ambitious target of lowering the poverty rate, Province 3 has announced to maintain a double digit economic growth (11 percent), raising it from the current 6.3 percent.

The province has expected to achieve robust economic growth through investment of federal capital. It aims to draw from the significant concentration of education, health, tourism, trade, industry and financial institutions in the province.

The other area it has given priority includes coordinating with the federal government to uptick foreign investment, foreign assistance, and development of large projects and infrastructure.

“Specialized agriculture, promotion of organic farming, intensive participation of cooperatives in agriculture and farming to increase farmers’ production and productivity to ultimately eliminate food imports are other focused areas of its economic activity,” said Khim Lal Devkota, vice-chairman of the commission.

“The five key catalysts for the province’s development are identified as follows: qualitative rural and urban infrastructure; specialized and commercial farming; specialized services and human resource development; small and medium industries and enterprises; and heritage-friendly qualitative tourism,” according to the summary of the paper for the
periodic plan.

KATHMANDU, Sept 13: The stock market opened lower this morning, remained under pressure till the close of the session. At... Read More...

Nepse inches up 4.97 points, while daily turnover amount dips to Rs 1.76 billion on Wednesday
5 minutes ago