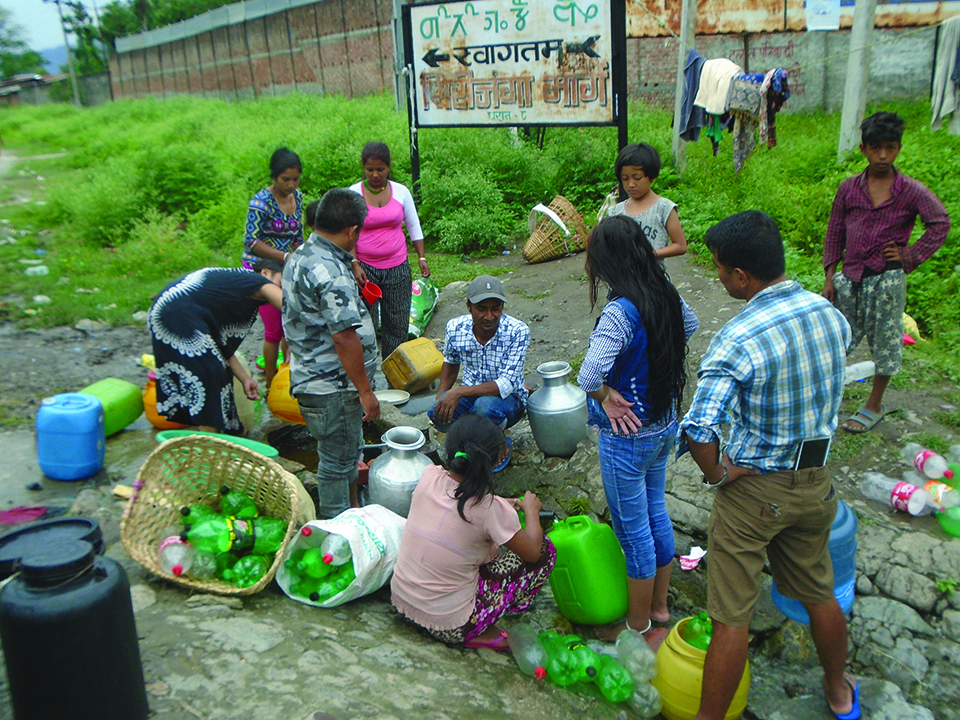 Amar Khadka/Republica Locals queue at a water sprout in Itahari, in this recent picture.

ITAHARI, Sept 4: Water tested in 16 different districts in eastern Nepal suggests that people have been drinking contaminated water. The alarming results were reported by the Regional Level Water Test Laboratory, Itahari, after testing 217 sample of water from two districts of Province 2 and 14 districts of Province 1. As much as 38.3 percent of harmful E.coli bacteria was found in some of the test samples. The bacteria are found in human feces and are believed to cause several diseases if consumed.

Laboratory tests show that there is high level of E. coli bacteria in water samples. However, if the water is treated with bleaching powder and kept in the sunlight for few hours, it is rendered drinkable. - Ramesh Kumar Yadav, lead chemist of the study

"These bacteria can cause diarrhea, nausea, headache, fever, and many stomach related ailments. Such water is simply not advisable to drink, but we have no choice," said a local from Itahari Bazzar, Ramesh Sharma. He added that this is not the first time such report came to the fore. 'And yet, things have not changed.'

According to Sharma, presently water treatment systems are not installed in their area. Without treatment, water is not drinkable. "No matter from which source it comes, pure drinking water cannot be available unless it is treated. We have to either boil it for long or the government must ensure a system to fetch clean drinking water," he added.

Due to the lack of awareness, people hardly boil water in the hills and the plains. They are actually habitual of drinking water directly from source. Many people consume water directly from the tube well, well, tap, stream or pond without purifying it. "We don't have that sense. People are not educated. And when we are not given clean drinking water even through the tap the government has fixed, what can be done?" Shrama asked.

During monsoon, the situation gets even worse as water in rivers gets dirty and locals drink the same water without purifying it. "We have to rely on river water most of the times. Those who live nearby jungles or rivers, basically depend on river water. Even when water is clearly muddy, people still use it," Sharma reported.

Meanwhile, Ramesh Kumar Yadav, chief chemist at the laboratory stated that the water can be used after using bleaching powder. If water is kept in sunlight, it is even better, he suggests.

"Laboratory tests show that there is high level of E. coli bacteria in water samples. However, if the water is treated with bleaching powder and kept in the sunlight for few hours, it is rendered drinkable," he stated.

The samples were from Tehrathum, Dhankuta, Jhapa, Morang and Sunsari, among districts. It took over a month to test all the samples, he said. Yadav further added that the bacteria are found in water mostly during before, after and during the monsoon season.

As per the National Drinking Water Quality Standards, 2062, water should be distributed for drinking only after is tested and approved for 27 parameters. If the test samples do not fare well in those parameters, such water should not be given to the public. However, in lack of proper implementation of the standard by the authorities concerned, people are still drinking sub-standard water, he said.

"People hardly care of the quality of water they are drinking. Even the drinking water distribution department, which is supposed to ensure the quality of drinking water, does not care," said Sharma. "When they say that bleaching powder should be mixed in water for purifying it, why don't they do it? They should have observed the sources and means through which people fetch drinking water," he added.

The Department of Drinking Water and Sewage (DDWS) in Itahari informed that it checks around 12 to 14 quality parameters for drinking water. While there is high level of the bacteria in the water samples from the hills and mountains, iron level is high in the water of the plains. There should be only 0.3 milligram of iron per liter of water, but in the plains up to 22 milligram of iron was found.

The problem of iron has been found in Siraha and Saptari districts. Similarly, arsenic was also found in high quantity in water in those two and other districts. It is said that high consumption of arsenic can cause cancer. Many skin diseases are also attributed to water with high level of arsenic. 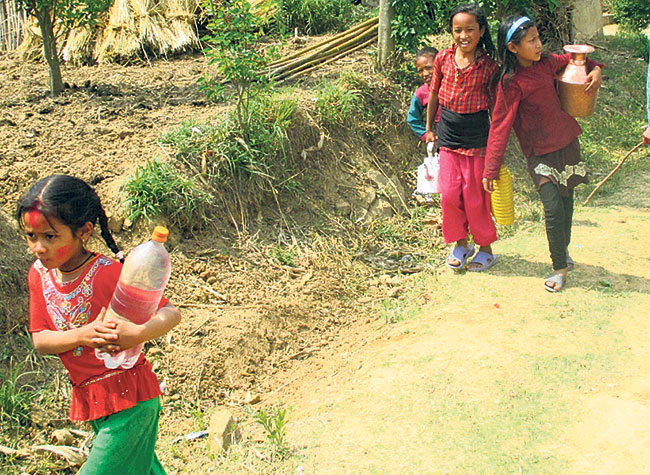 Scarcity of drinking water driving people out of village in Palpa

PALPA, June 4: Gothari Ghari village of Mathagadhi Rural Municipality-5 in the district is emptying at a faster pace for... Read More...

JAJARKOT, June 12: Though it may sound strange, it is the reality for the 30 households at Pyargara of Tribeni... Read More...