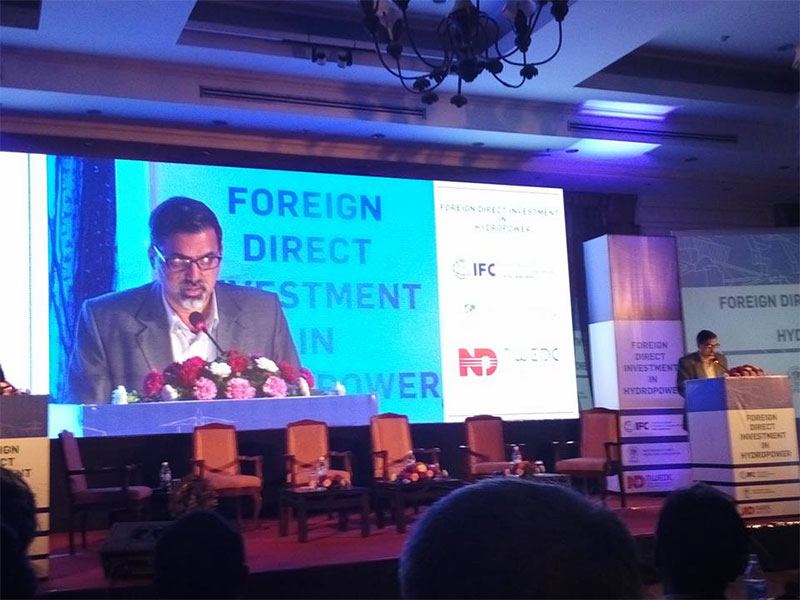 Ministry for Energy Janardan Sharma delivering his speech at a forum titled “Foreign Direct Investment in Hydropower” in the capital on Tuesday. (Republica)

KATHMANDU, Sept 7: Minister for Energy Janardan Sharma has said that the government is preparing to sign the Project Development Agreement (PDA) with the promoters of the 216 MW Upper Trishuli-1 hydroelectricity project.

Sharma further said that it is high time for Nepal to attract FDI to exploit its rich water resources. “We have both natural and human resources. What we do not have is enough investment. Therefore, the importance for FDI is very high for Nepal,” said Minister Sharma.

Stating that Nepal has already signed a Power Trade Agreement (PTA) with India, a huge market for Nepal’s hydroelectricity, Minister Sharma said this agreement is going to encourage FDI in Nepal’s hydropower sector.

He went on to say that it takes years for hydropower promoters to get license and sign Power Purchase Agreement (PPA) and Power Development Agreement (PDA). “This does not encourage the foreign investors,” added Sharma.

Similarly, speaking at the program, Maheshwor Neupane, Director General of the Department of Industry, said the government has a policy of prioritizing the hydro sector for FDI. He also said that FDI in hydropower sector has been increasing, though slowly.

Stating that the Korean government has built fundamental industries and developed Korea’s economy through foreign loans and foreign direct investment, Choe Yong Jin, Korean Ambassador to Nepal said, “Nepal has one of the largest potentials in generating hydropower. But such a great potential can only be materialized into reality through investment. And this investment is possible through discussions with all the stakeholders and decisiveness and strong will of the leaders.”

Envoy Jin expressed hope that the Upper Trishuli-1 Project, which is being developed by the international consortium NWEDC in collaboration with Korea South-East Power (KOSEP) and IFC, will make significant contribution to increasing total hydropower generation of Nepal.

As a result, Yup said, Korea was able to build a base for a sharp economic growth that surprised the whole world.

“At last, after 30 years of receiving FDI, Korea became one of the top 10 exporting countries in the world, with its export volume of USD 2,000 billion. Now, it is Korea who makes FDI in other countries.”

Comparing Nepal and Korea, he said both the countries have a similar geography.

Similarly, speaking at the program, Khadga Bahadur Bisht, President of Independent Power Producers’ Association Nepal (IPPAN), said that the policy makers of our country should seriously dwell on the FDI. “We have been seeking FDI since 1981. But there have been only a few hydro projects funded through FDI. Nepal hasn’t done well in terms of attracting FDI.” Nepal’s policy makers have to give priority to FDI, he added.