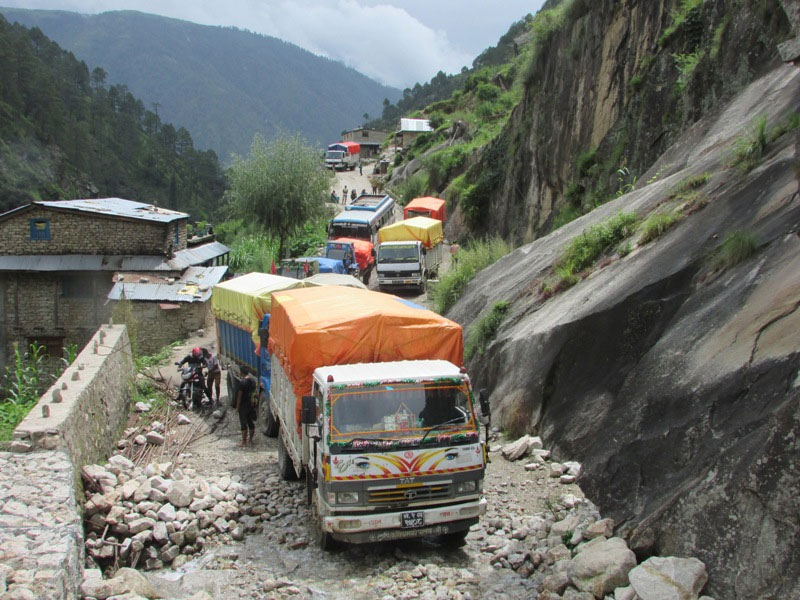 SURKHET, April 7: Various sections of the Karnali highway have been obstructed due to floods and landslides caused by heavy rain and hailstorm on Saturday night.

As a result, passengers going to Karnali from Kathmandu, Nepalgunj and Surkhet have been stranded.

Sporadic rainfall and continuous landslide has made the effort to clear the road difficult, said Chief District Officer Chandra Bahadur Karki. Meanwhile, the Road Division Office in Jumla has said that it has been working to clear the obstruction in Gaganekhola after clearing debris at Dahikhola, Kittabhir and Padukakhola.

The landslide at Gaganekhola has become a headache every year, says engineer at the Office Srawan Kumar Mahatar. Likewise, Nepali army, Nepal police, Armed police force, Road division office have been working since this morning to open the road for traffic as soon as possible, the District Administration Office, Kalikot said. RSS

JUMLA, Aug 28: Vehicular movement along the Karnali highway resumed today as Road Division Office cleared the landslide that had been... Read More...

ROLPA, July 18: A passenger bus has been buried by landslides in the district on Tuesday night. ... Read More...