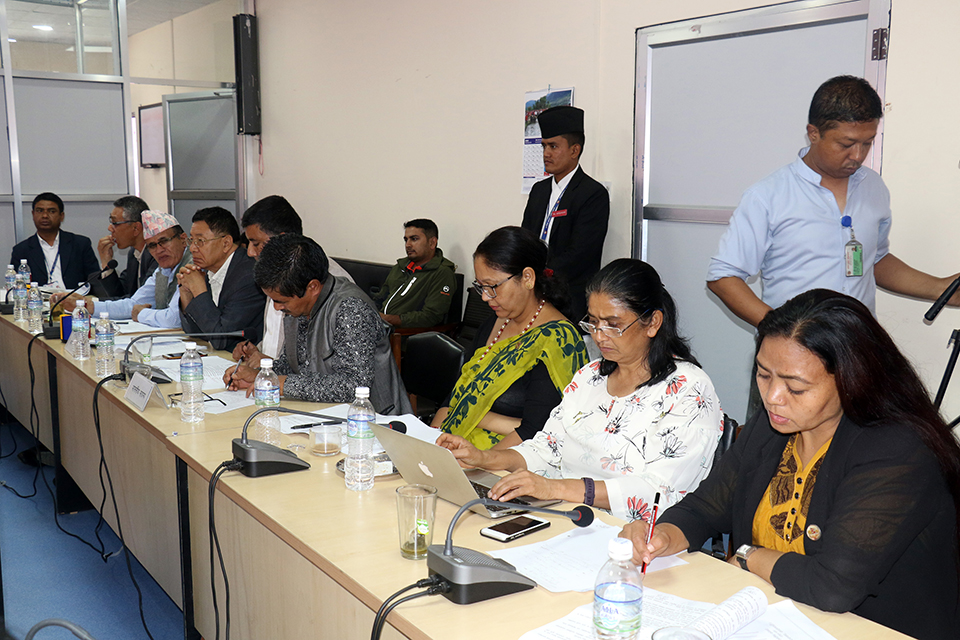 KATHMANDU, July 23: Lawmakers and experts have suggested the parliament to prepare the advertisement bill in a way it would curb irregularities, malpractices and rumors spread via advertisement.

The parliamentary committee on Development and Technology held discussion with the experts on the draft bill on advertisement-2075, where suggestions were given to prevent women's use in the advertisement of foods, and drinks and stop misleading publicity relating to sensitive information related to health. They stressed that the body to regulate advertisement needs to be autonomous and the officials in the body should be appointment via open competition.

The Ministry of Communications and Information Technology prepared the draft of the bill on advertisement focusing on the management and regulation of national and international advertisement published and disseminated in Nepali media and guarantee of objectiveness.

Lawmakers as Bahadur Singh Lama, Ganesh Pahadi, Ram Bahadur Bista, Indu Sharma, Binda Pande, Prem Suwal, Kamala Rokaya and Jip Chhiring Lama put forth views on the draft bill. Another expert Laxman Humagain underscored the need to form a powerful regulatory agency and devise acts and laws to streamline the advertisements as, he claimed, there were cases of economic and cultural exploitation in the name of foreign advertisements.

He spoke of the need to make the advertisement regulatory agency autonomous and the office-bearers in the agency be appointed through open competition. The transaction of advertisement in Nepal is estimated at Rs 10 billion annually.

Present at the Committee were former Prime Minister duo Jhalanath Khanal and Sher Bahadur Deuba. However, Deuba, who was participating in the meeting for the second time, walked out from the meeting 10 minutes after attending it while Khanal remained throughout the meeting. Also present at the meeting was Secretary at the Ministry of Communications, Information and Technology Mahendraman Gurung.

Leader Khanal said that since the regulation of advertisement was a matter of national and public concern, more consultations should be held on the experts and stakeholders to introduce the Advertisement Act at the earliest. Committee's President Kalyani Khadka said that further consultation on the same would be held and the bill would be given a final touch. She underlined the need to accommodate the sentiments of one and all concerned in the bill and make it 'rich'.

KATHMANDU, Aug 30: The lower house of parliament endorsed the Advertisement Regulation Bill on Thursday amid concerns from media organizations over... Read More...

KATHMANDU, The meeting of the House of Representatives (HoR) has endorsed the Advertisement (Regulatory) Bill-2076 BS on Thursday by a... Read More...

KATHMANDU, Mar 4: All parliamentary committee meetings including the scheduled meeting of the National Assembly (NA) were put off on... Read More...

Despite COVID-19 fears, thousands of Nepalis leave for India to earn bread and butter
14 hours ago

A  bunch of jobless people seeking to bring instability in the country sought my resignation: PM Oli
5 hours ago

NC will stay in opposition: Singh
3 hours ago