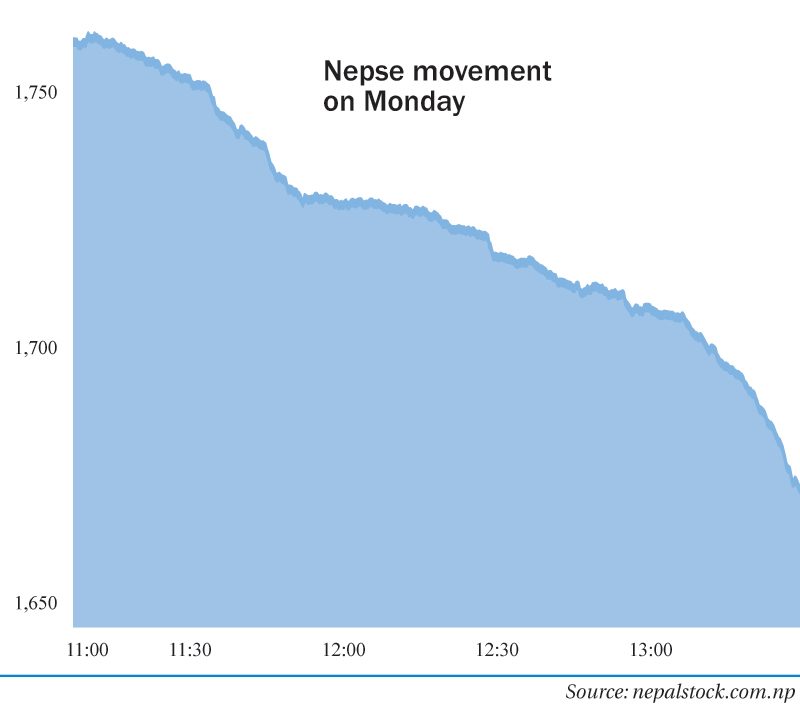 After the benchmark index plunged 5 percent by midday, Nepse triggered circuit breaker, suspending trading for the rest of the day.

Though the stock market has been on a correction mode for the past one week, Monday saw one of the worst routs after the market started bull runs last year. Monday's plunge wiped Rs 97.88 million off the stock market.

"Panic selling began as soon as the market opened for trading. There was selling pressure throughout the day until the circuit breaker brought trading to the halt," Anjan Raj Poudyal, former president of Stock Brokers Association of Nepal (SBAN), told Republica. "Many new investors entered into the market during Nepse's bull run. They become hyper reactive when there is minor correction in the market."

Though country's economy was suffering badly due to earthquakes and the Tarai turmoil, share prices were going up continuously in the bull market, partly due to cheaper financing available from the bank and financial institutions due to excess liquidity.

However, the market had taken a correction mode last week. Many investors blame the return of CPN (Maoist Center) leader Pushpa Kamal Dahal as the prime minister for the second time, Securities Board of Nepal's recent 'unwarranted' cautions to investors, and the board's move to look into illicit flow of money into the stock market as the reason behind the fall in share prices.

Deputy Prime Minister and Minister of Finance Krishna Bahadur Mahara had tried to soothe investors as the market ended in the red zone after Prime Minister Dahal was sworn in as the executive head for the second time.

In a meeting with investors last week, Mahara had said that the investors do not need to be frightened with their government. He also vowed to unveil the government's plan and position about the stock market soon.  The capital market regulator Sebon has also clarified about its recent statements and moves that many attributed to the sudden and unexpected dive in the stock market on Monday.

Investors say that the sudden fall was driven by fears and rumors. "The stock market seems to have entered into 'fear zone' from the 'greed zone'. Until recently, investors were buying shares in the bullish market expecting the prices to go up further. Now some minor correction is sparking fear," Atma Ram Ghimire, chairman of Nepal Investors Forum, said "Correction is a natural phenomenon in healthy and mature stock market. It was overdue.''

"However, the current rout due to broker investors and unnecessary statements and articles of Sebon officials could spell risk to investors," Ghimire added.

Nepse down 16 points as market remains in bear territory