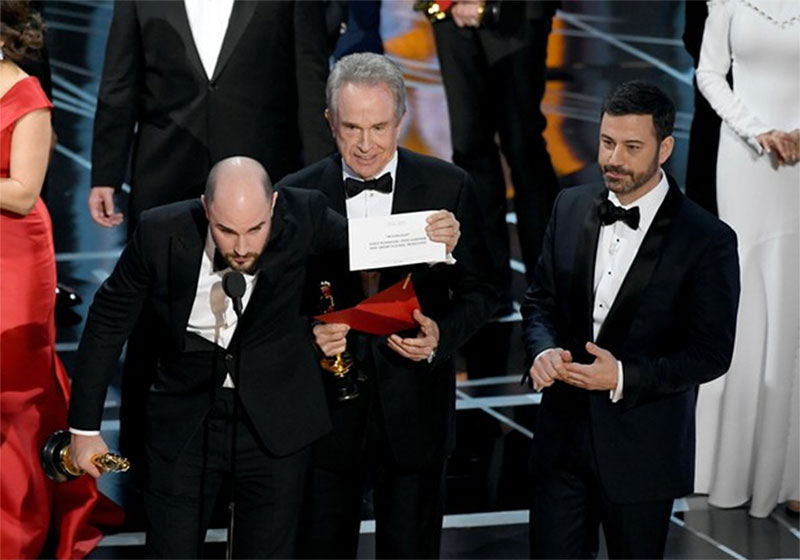 March 3: The 2018 Oscars — or the 90th Academy Awards, if you'd prefer — are headed our way on Sunday, March 4, bringing glitz, glamour and maybe even a headline-grabbing mix-up or two, like the 2017 snafu that was the "La La Land"-"Moonlight" debacle (as documented in the photo above). This year, nine films are up for best picture, just one of 24 award categories that will be featured in the Oscars broadcast.

Hollywood's biggest night not only promises a cavalcade of A-list actors and designer dresses, but also tends to mint a selection of memes and awkward moments to delight everyone watching along on social media.

What time are the Oscars in 2018? What channel?

The 2018 Oscars start at 8 p.m. March 4 on ABC. The network's pre-show, "Live From the Red Carpet," featuring interviews with nominees and presenters, starts at 6:30 p.m. with hosts Michael Strahan ("Good Morning America") and Wendi McLendon-Covey ("The Goldbergs").

Viewers can also livestream the Oscars at abc.com or through the ABC app, but must sign in with their TV provider to watch.

Who are the Oscar nominees?

The Academy Awards always end with the winner for best picture, but there are a lot of categories to cover before then, from best actress to best supporting actress to cinematography, documentary feature, makeup and hairstyling, costume design and film editing.

The nine best picture nominees are "Call Me By Your Name," "Darkest Hour," "Dunkirk," "Get Out," "Lady Bird," "Phantom Thread," "The Post," "The Shape of Water" and "Three Billboards Outside Ebbing, Missouri."

Who is hosting the Oscars?

Jimmy Kimmel will return to host the Oscars for 2018, even after the "Moonlight" morass he found himself in last year. In a promo for ABC, Kimmel made light of being traumatized by the events of last year's awards show.

"You know I dream about it every night," he says in the video, which features a guest appearance from Beatty. "I can't even open the mail because of, you know, all the envelopes — it just piles up."

Kimmel will be the first person to host the awards show in consecutive years since Billy Crystal in 1997 and 1998.

Who are the presenters at the Oscars?

The 2018 Oscars boast a series of nominees, actors from nominated films and other popular entertainers who will hit the stage as presenters.

Daniela Vega, who stars in Chile's "A Fantastic Woman," which is nominated for best foreign language film, will make history as the first openly transgender performer to walk the stage as a presenter at the Oscars.