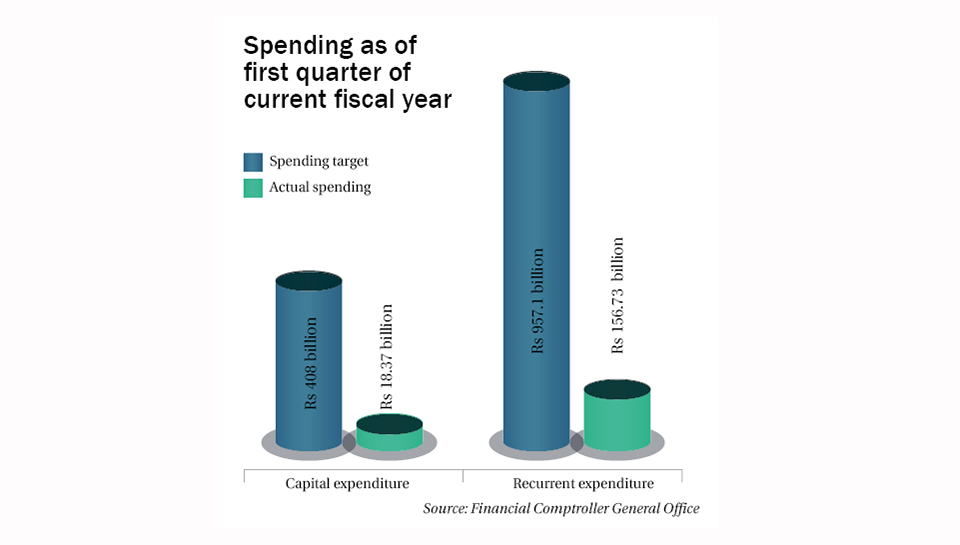 KATHMANDU, Oct 20: The government has been able to achieve only 4.41% of capital expenditure progress in the first quarter of the current fiscal year – FY2019/20.

According to the data of the Financial Comptroller General Office (FCGO) at the Ministry of Finance (MoF), the government has been able to spend only Rs 18.37 billion in capital budget.

While the underspending of the budget allocated under the heading of capital expenditure has been a perennial problem, the current government has been vowing to boost the spending in the current fiscal year by introducing various measures. However, the capital expenditure progress remained weaker in the first quarter if compared to the same period of the last fiscal year – FY2018/19.

According to the FCGO, the government had spent 7.2% (Rs 22.6 billion) of the budget allocated under the capital expenditure heading (Rs 313.99 billion) in the last fiscal year.

Amid criticisms that the two-third majority government has also failed to boost the capital spending, the government had defended that its focus was mainly on drafting and revising laws as required after the constitution promulgation.

The primary focus on setting up institutions in the federal set up, confusion over jurisdiction of projects and delay in staff adjustment were the reasons that the Finance Minister Yuba Raj Khatiwada had used to justify poor capital expenditure in the last fiscal year.

While capital expenditure tends to remain weak in the first quarter as spending units draw contract and bidding plans during this period, the low spending goes against the commitment of the minister.

Addressing the parliament in May last year, Khatiwada had even said that the government’s countdown would start from May 29 – the day when the budget is tabled in the parliament – to achieve the capital spending target without any excuse. However, the first quarter’s data on the capital spending shows that the government has failed to live up to its pledges.

The low spending in the first quarter also indicates that the large chunk of the expenditures will be made in the second half of the fiscal year, raising the question about the quality of the spending.

While the capital expenditure has remained below 5% in the current fiscal year, the government has been able to make 16.38% of recurrent expenditure in the review period.

According to the FCGO data, the government’s recurrent expenditure stood at Rs 156.73 billion in the review period compared to the allocation of Rs 957.1 billion for the current fiscal year. The aggregate spending of the budget including recurrent, capital and financing stands at 11.61%, according to the data.

KATHMANDU, Feb 19: National Planning Commission (NPC) has stated that the Ministry of Finance (MoF) has been transferring budget in... Read More...

KATHMANDU, Feb 13: The government on Wednesday expressed its firm determination to achieve its target of economic growth after revising... Read More...

KATHMANDU, Nov 2: A delegation of nine executive directors out of a total of 25 along with two alternative executive... Read More...