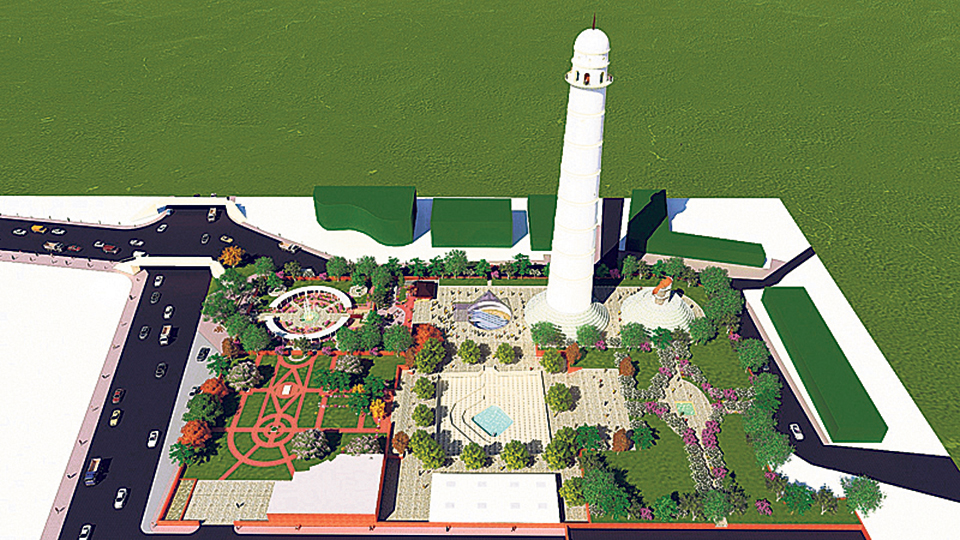 KATHMANDU, Sept 14: Twenty-six percent of reconstruction work of Dharahara has been completed so far. According to National Reconstruction Authority (NRA), the construction company GIETC-RAMAN JV gave the details during a progress review.

As per the information provided on the NRA’s official website, the work of concreting basement has been completed and the work of lifting the beam slabs is going on. Similarly, work on laying pile protection foundation in the east side where the General Post Office (GPO) is located, is going on. However the company said given the construction area provided to the contractor, the reconstruction rate has reached 67.5% , states the NRA’s update.

The locals had shown disapproval regarding the traditional Upaku pathway. A consensus on opening the pathway was reached last week amongst the local elected representatives, representatives of the NRA and the construction company responsible for the reconstruction of Dharahara.

The reconstruction of Dharahara started in December 2018 after Prime Minister Khadga Prasad Oli laid the foundation stone. The government had made a detailed design public in August 2016. The reconstructed Dharahara, according to the construction design, will comprise of mini theatre hall, a museum, a musical fountain, a food court, stone water spouts, souvenir shops and parking space. The government has allocated Rs 3.45 billion for the reconstruction of the historical monument. The 75-meter-high tower will cover an area of 21,267 square meters. The landmark built in 1831 collapsed for the second time due to 2015 earthquake.

Raft foundation for Dharahara being laid

KATHMANDU, May 29: The contractors building the Dharahara tower, which was destroyed in the 2015 earthquake, have informed that the... Read More...

30 per cent of reconstruction of Dharahara completes

KATHMANDU, Nov 28: Approximately 30 per cent of the reconstruction of the Dharahara Tower has completed around one year of... Read More...