One flight a day rule enforced for paragliding pilots 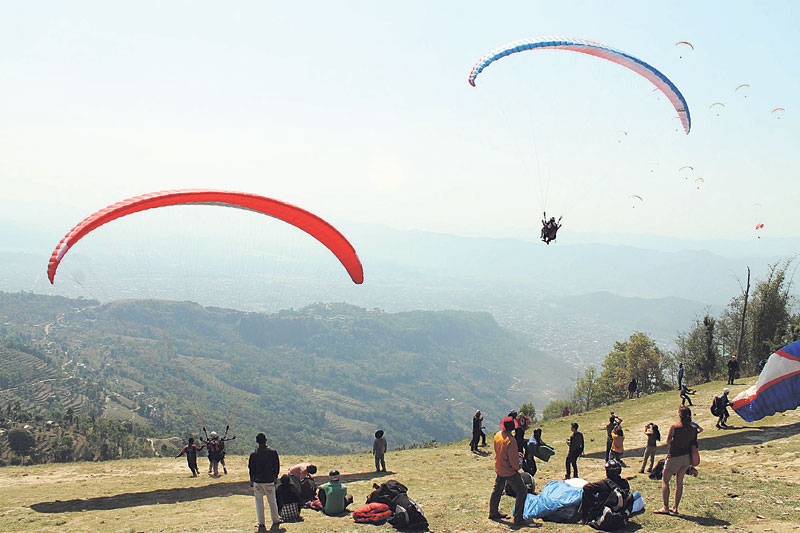 Pilots, companies flay the decision
POKHARA, July 13: Blue Sky Paragliding Ltd, one of the oldest paragliding operators in Pokhara, has four pilots. But the company is not allowed to operate more than four flights a day because of a new provision enforced by Nepal Air Sports Association (NAA).

NAA, which is a professional organization of paragliding companies, has barred paragliding pilots from operating more than one flight a day.

Narayan Parajuli, promoter of the company, said they were forced to refer their clients to other companies because of the new rule. “Our four pilots can operate a maximum of four flights a day,” he added.

“It is creating problems for us in the off-season. We can only imagine what will happen in the peak season,” he added.

Blue Sky Paragliding is in business since 2001.

“The new rule only aims to give business to new paragliding companies which are yet to start operation. It's not appropriate to stop us from operating independently in this competitive market,” he added.

“The new rule is inflicting a huge loss on us,” a manager of another paragliding company told Republica, seeking anonymity.

NAA had limited number of flights that a pilot can operate in a day to three a few months ago. Now, it has been brought down to one flight a day.

A paragliding company is allowed to hire a maximum of six pilots.

Thanks to the new rule, tourists now have to visit several paragliding companies to book their flights.

Paragliding operators also say that NAA has barred them from reducing the price. NAA has said that it would ban a company from operating flights for five days if it is found reducing price. Similarly, pilots operating more than one flight a day will be banned from flying for 15 days.

Pilots are not happy with the new rules. Khum Bahadur Gurung, chairman of Nepal Paragliding Pilot Club, said: "These rules are enforced in an arbitrary manner by some paragliding companies to survive competition in the market.”

However, Basant Raj Dawadi, general secretary of NAA, defended the new rule, stating that it will provide business to all companies. “This is not the time to compete with each other,” he said, adding that the rule has to be enforced to make sure that all companies get some business in this off-season.

KATHMANDU, Oct 29: The pilot of the Buddha Air flight which was diverted from Biratnagar to Kathmandu on September 27... Read More...

KATHMANDU, May 29: The announcement of Buddha Air to operate scheduled flights between Nepalgunj and New Delhi is expected to benefit... Read More...