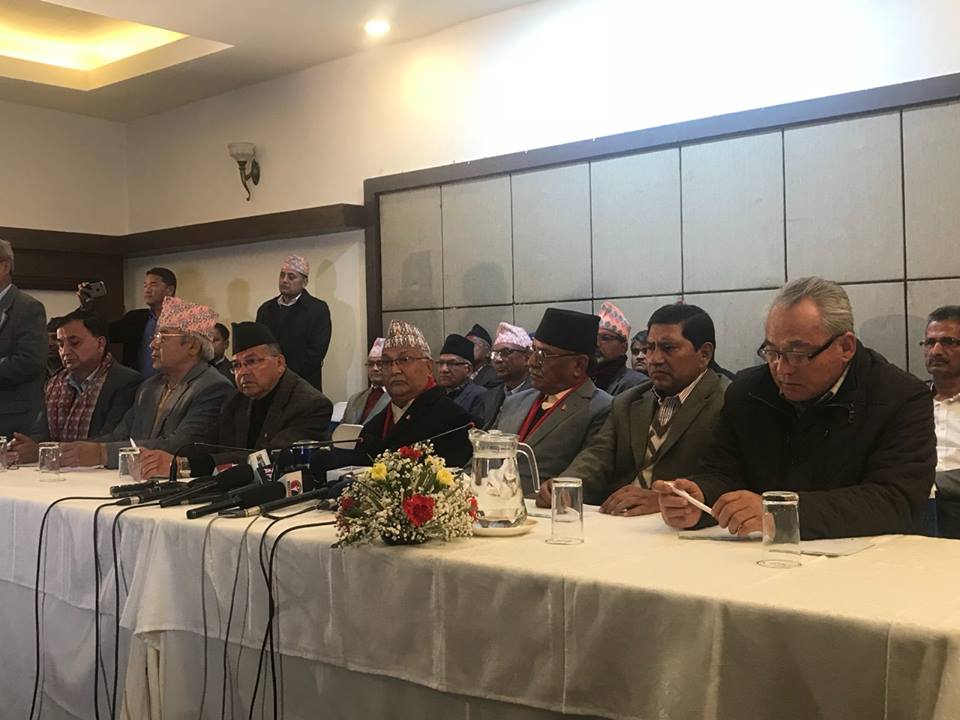 'Balanced relations with both neighbors'

KATHMANDU, Dec 18: CPN-UML Chairman K P Sharma Oli, who is widely seen as the prime minister-in-waiting after his party became the single largest party in the recently held parliamentary and provincial assembly polls, has asked one and all not to run after rumors that the left alliance government won't have good relations with India.

Responding to a query by journalists if the left government will bring a major shift in foreign policy toward India as speculated by a section of society, Chairman Oli said his government will ensure balanced relations with both the neighbors -- India and China.

"Adhering to an independent foreign policy as mentioned in Nepal's constitution, we are committed to maintaining cordial relations with all friendly countries, mainly the neighboring countries, and international organizations and institutions," he said.

Oli, who was flanked by CPN (Maoist Center) Chairman Pushpa Kamal Dahal, vented his ire against what he described as the so-called intellectuals for trying to spread rumors against Nepal. "We have clearly mentioned our foreign policy in the joint election manifesto as well," he said, while arguing that there would be no fundamental shift in Nepal's foreign policy during their tenure in government.

The remarks by Oli come amid a section of journalists and strategic thinkers in India expressing concerns that Nepal would get closer to China than India after the left alliance comprising the UML and the Maoist Center secured nearly two-thirds majority in the parliamentary and provincial assembly polls. They have termed Oli as someone close to China -- something Oli rejects outright.

Speaking on the occasion, Oli expressed happiness that India welcomed the results of the democratically held elections in Nepal. "India has already given its statement. [India has said] We recognize the people's mandate; we hope that this will bring stability; we express happiness and look forward to work together in future with the new government," Oli said referring to the recent statement of the Indian Ministry of External Affairs (MEA) spokesperson Raveesh Kumar on Nepal's poll results.

While criticizing those who warn that massive capital flights would occur and economic downturn would start if leftists come to power, Oli asked one and all not to believe in such rumors.

"These are rumors, just propaganda against us. We cannot think of disallowing foreign investment and sending the share market crashing. These are nothing but lies spread by certain interest groups," he said.

South Asian Air Pollution: A Pressing Concern for the Himalayas
20 hours ago

Labor Minister’s 100 days of work: Labor permit made paperless, homework on new employment destinations being done (with list)
9 hours ago