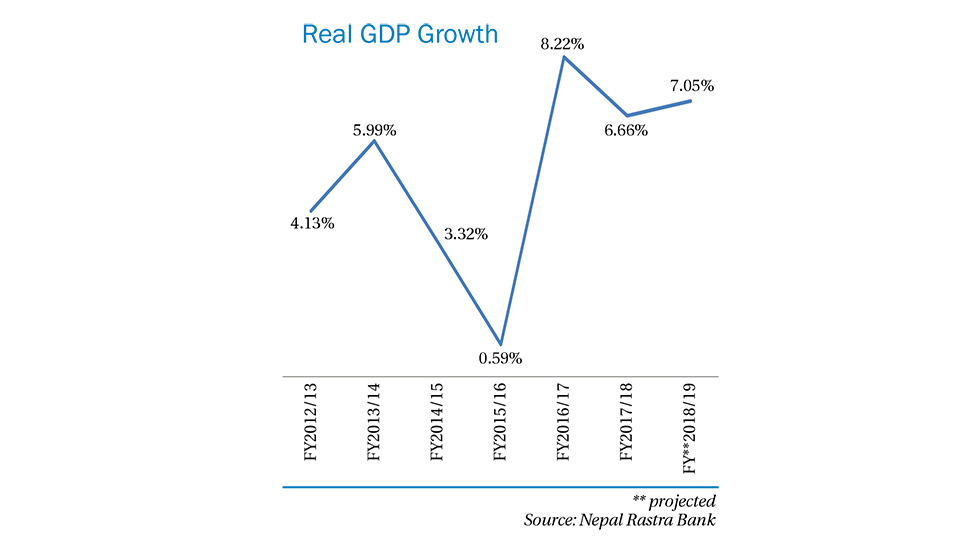 KATHMANDU, Sept 21: Prime Minister KP Oli has announced that the government will increase the size of the economy to Rs 5 trillion within his current tenure. The current gross domestic product (GDP) stands at Rs 3.5 trillion.

“The size of our economy is currently nearly Rs 3.5 trillion. Over the entire period of this government, it will increase to Rs 5 trillion,” said the prime minister while addressing a function in the capital marking Constitution Day.

Will the economy in fact grow by Rs 1.5 trillion in the remaining three and a half years of the current government’s five-year term? It will in nominal terms if the current growth momentum is maintained.

To put this into some perspective, the nominal GDP is projected to have increased by 14.2 percent to Rs 3.46 trillion in the last fiscal year 2018/19, according to data from Nepal Rastra Bank.

However, the real GDP is projected to grow by 7.05 percent. The government has set a target of achieving 8.5 percent real economic growth in the current fiscal year, 2018/19.

“The target of a 5-trillion-rupee economy in the next three years is attainable provided the government initiates structural reforms, executes bigger infrastructure projects and sustains the current growth momentum,” said Nara Bahadur Thapa, an economist who used to head the Research Department at the central bank.

“For that to happen, the government and the private sector should make a concerted effort. High economic growth is something that the country and the people have long aspired for,” he added.

However, sustaining the current growth momentum will be quite challenging, say some economists.

Growth in the last three years has been driven largely by favorable monsoons, the post-earthquake reconstruction drive, recovery in tourism and the end of power outages.

“The 5-trillion-rupee economy is not unattainable if the economy grows at the annual rate of the last three years. But, do we have the preconditions to sustain the current pace. Not yet,” said Keshav Acharya, who was chief economic adviser at the Ministry of Finance between 2009 and 2011.  “There is a slump in foreign direct investment, liquidity shortage in the banking sector is now becoming the norm, and we have not been able to achieve our capital expenditure targets,” he said.

“Above all, government allocations and spending are likely to feel a squeeze given the rise in recurrent expenditures under federalism,” he added.

PM Oli advised to avoid public functions for a week