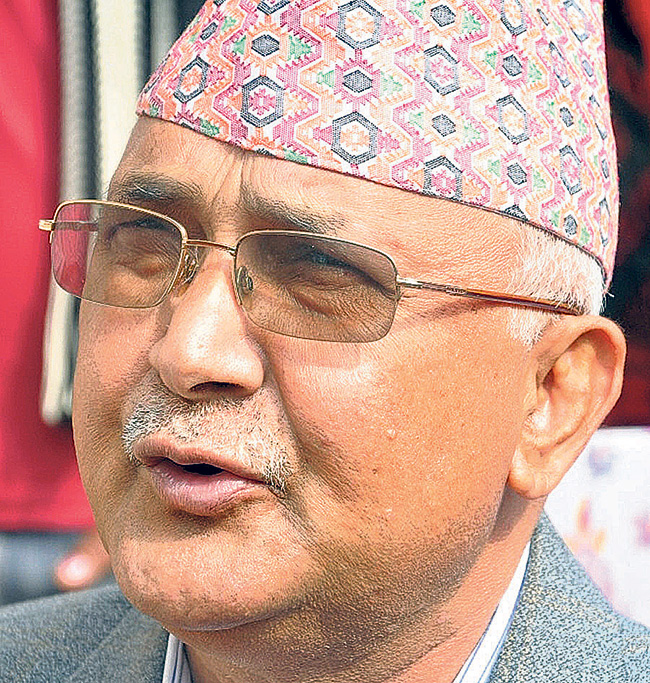 KATHMANDU, Nov 17: CPN-UML Chairman KP Sharma Oli on Friday leveled fierce criticism at Dr Govinda KC, who has been crusading for  reforms in medical education and the health sector, and at Kamal Thapa, chairman of Rastriya Prajatantra Party .

Oli voiced strong objection to the provision in the Medical Education Ordinance, recently issued by the government, barring the establishment of any new medical college in  Kathmandu for the next 10 years.

“A government employee [Dr KC] stages a fast-unto-death. The government holds talks with him and issues an ordinance as per its convenience, barring anyone from establishing a medical college for 10 years,” Oli told editors and publishers of various media organizations at Hotel Annapurna.

Oli said  it is not a government which has only 15 days’ tenure left that can take  decisions that will have an impact for years. “Decisions taken arbitrarily by the government now will be revoked by  tomorrow’s [next] government,” he said.

Oli also criticized Dr KC for seeking information about the delay by President Bidyadevi Bhandari in certifying the Medical Education Ordinance. “Government employees should work as per their  assigned role. If there is  interest in politics [he/she] should enter that field,” he said.

Oli claimed that with a large number of Nepali students  going abroad to study medicine a huge amount of money is  leaving the country. He said  investors and the government  could decide about the number of medical colleges to be established in the country.

Oli also objected to the government decision to scrap the previous government’s  award of the contract for the 1,200 MW Budhigandaki hydropower project to the Chinese company Gejuwa. “An election government can’t provide a license to anyone, nor can it revoke such a license,” he said. “As the UML and Maoist Center have forged an alliance, they will have a majority  and form the government. Our friends might have already guessed this,” he said.

He accused the government of not consulting  the major opposition parties while taking important decisions. “Tomorrow [in future] the UML will take decisions as per its need and  revoke what needs to be revoked,” he said. “UML is no amateur player.”

“Think twice before speaking. He should remember the person whose statement he is denouncing.”
Oli criticized  Communist Party of Nepal chief Netra Bikram Chand for carrying out the ongoing violent attacks on poll candidates. He said “such terrorist activities should  stop immediately.”