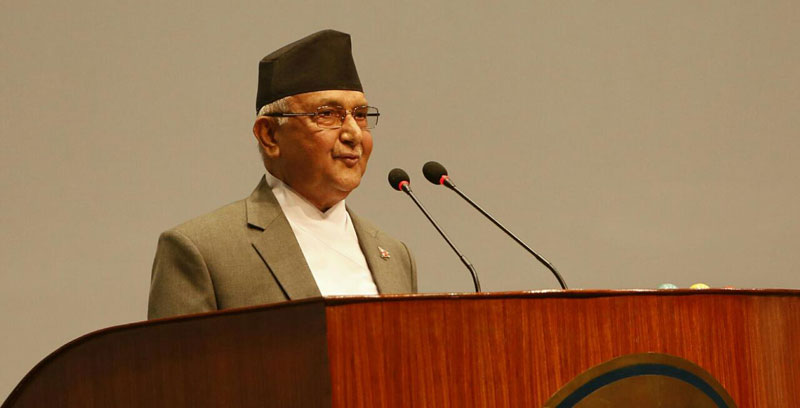 KATHMANDU, July 25: While stepping down as head of the government, outgoing Prime Minister

K P Sharma Oli has forcefully raised some big questions with the rival party leaders who are going to form the new government.

He asked the rival leaders what will be the fate of some major national projects in particular that were expedited during his nine-month tenure.

“What will be the fate of the Kathmandu-Nijgadh Fast Track Road for which the government has allocated a budget under a plan for the Nepal government itself to develop it?” asked Oli while addressing parliament Sunday. “What will you do with the Kerung-Kathmandu-Pokhara-Lumbini Railway that we have proposed?”

Oli was indicating the questions at CPN (Maoist Center) Chairman Pushpa Kamal Dahal, who is almost certain to replace him as prime minister.

Stating that the present government introduced new programs for the construction of the Tarai-Hulaki Highway by the Nepal government, Oli asked if they would ignore the project yet again just like in the past. He went on asking questions about a few more programs and projects that his government had introduced or revived during this period.

Oli said that he had suffered a series of betrayals by major coalition partner CPN (Maoist Center) and indicated he would pose a tough challenge to the new government in the days to come.

“I want to say clearly here at this meeting that this moment is not the end of time, as it is a continuous process! We are still here,” Oli said repeatedly during his two hour-long speech in the House.

He said the new constitution has ensured the representation and rights of women, Dalits, Janajatis, Madhesis, Tharus, Muslims and other marginalized and oppressed communities, and that his government was firm in implementing these constitutional rights. “But if you are for describing Nepal as a multi-nation state, for belief in each difference as a separate nationality and if you are indicating these same things as the basis for delineating the provinces, I want to make it clear that this is wrong and can’t be acceptable,” he said.

He asked what crime he had committed by ending trade dependence on a single country, India, and signing historic trade agreements with China.

“Has our move to transform land-locked Nepal into a land-linked country become too hard for some friends to digest? Is it your interest to give continuity to the situation of Nepal as a dependent country? If not, why this type of unhealthy politics over such an important issue?” he asked. “I am taken by surprise when those friends who used to burn down cinema halls and motor vehicles with foreign registration numbers now accuse the government of foreign-relations imbalance.”

Oli, who used most of his speech to criticize Dahal for not cooperating with him despite his best efforts to please him, accused the Nepali Congress of standing against the formation of a national unity government since last year.

NC President Sher Bahadur Deuba, while addressing the House before the prime minister’s address, said that the government’s decision to recommend to the president to remove the constitutional difficulties was unnecessary.

“There is no ambiguity in the new constitution. Governments were formed and dissolved in parliament in the past and the new government can be formed in the same way as in the past,” Deuba said. “So, there was no need to ask the president for this move. Still, if it simplifies the process, we are not going to object to it.”

Deuba said that his party would play a supportive role in implementing the agreements signed by the government with other countries and international agencies in the days to come. Underscoring the need for maintaining balanced relations with both the neighboring countries, Deuba said Nepal’s foreign policy has helped the country sustain itself.

He vowed to support the government in holding all three elections and implementing the constitution.