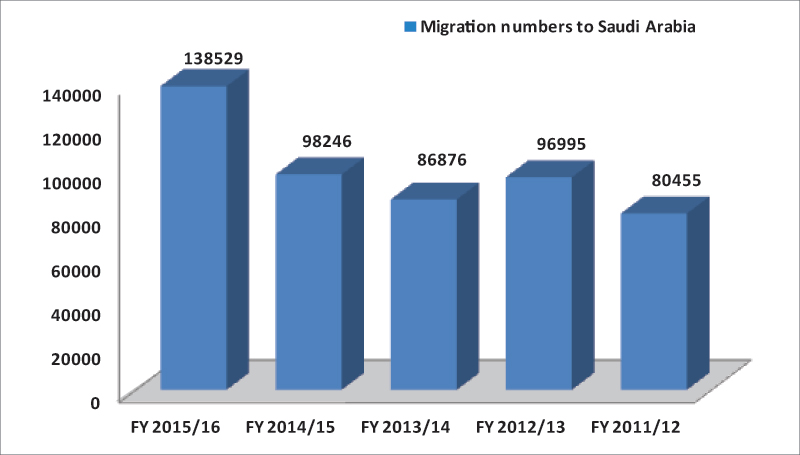 KATHMANDU, Aug 13: At a time when thousands of migrant workers have been laid off and stranded in Saudi Arabia, the number of Nepali migrant workers leaving for the Saudi has not declined.

According to the Department of Foreign Employment (DFE), as many as 13,227 people have left for Saudi Arabia over the past one month (since July 1 to August 12). The number of outbound workers to Saudi Arabia was 13,553 during the corresponding month last year.

Adhikari attributes this trend to lack of knowledge among the Nepali migrant workers about the recent crisis in Saudi Arabia.

“Aspirant migrant workers would not have opted to go to Saudi Arabia had they been aware of the situation there,” Adhikari said.

“As Saudi Arabia is reeling under economic crisis and companies are not able to pay for the migrant workers, they are facing food crisis after being laid off from their jobs. It is the negligence on part of the government to allow Nepalis to go Saudi Arabia in such situation,” said Prabhu Sah, chairman of the International Relations and Labor Committee of the parliament.

“The committee has directed the government to bring back migrant workers to home after receiving complaints that they are facing problems in Saudi Arabai,” he said. High number of outflow to Saudi clearly shows that the government has not taken the issue seriously about the possible adverse impact.

“Thousands of Nepali migrant workers may face difficult times as the situation in Saudi Arabia is quite chaotic and uncertain due to recession,” Sah said, adding that the government's indifference in such situation is quite surprising.

The committee will grill the concerned officials over possible nexus between manpower agencies and politicians.

KATHMANDU, Aug 10: The International Relations and Labor Committee of the Legislature-Parliament on Wednesday directed the government to rescue all... Read More...