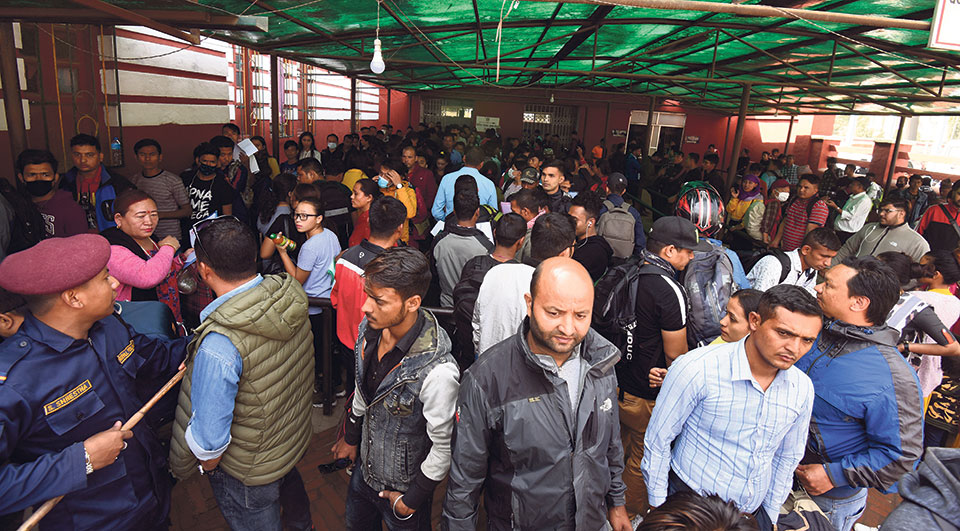 A large number of people at the Department of Passports in Kathmandu seeking passport to apply for the American Diversity Visa. Photo: Monika Malla/Republica

KATHMANDU, Oct 23: The mandatory provision of the Diversity Visa of the United States to include the applicants' passport number from this year has resulted in a dramatic surge in the number of persons seeking passport.

The DV lottery for 2021 which was opened on October 2 introduced a few new rules for entries where the all applicants must mention their passport number, country of issuing the passport and passport expiration date.

According to the Department of Passports (DOP), 500 people used to apply for passports on an average day before the announcement of DV lottery of this year. The number has reached 2,800 applicants per day since the DV lottery was opened.

“We suspect the number will increase in the same rate in the coming days,” said Tirtha Raj Aryal, information officer at the Department of Passports.

For instance, the number of people applying for passport at the DoP on October 2 was just 382. However, the number reached to its highest with 2726 applicants in a single day on October 20.

Most of these passport applicants fall in the 18-45 years of age group. As the time for issuing a passport through the District Administration Offices is relatively long since it takes at least 15 days, the DoP witnessed a sharp rise in the numbers of passport applicants in various other districts than Kathmandu itself.

“I'm applying for the DV this year and I'm here to make my passport. I thought of making it from Rautahat itself but it would take about two weeks and would delay the process to apply for DV lottery,” said Manisha Shah, 21, who travelled all the way from Gaur, Rautahat to the capital.

Keeping in view of the sharp increase in the number of passport applicants, the DoP has added a few more security personnel to manage and look after the crowd. Similarly, 10 more officials from the foreign ministry are deputed at the DoP to help in the internal processing of the passport applications.

According to Aryal, the DOP has also increased the working hours for the officials in the department for a certain period of time. While the working hours earlier were limited from 9am to 5 pm, the DoP now opens from 7 in the morning and closes at 7 or 8 pm in the evening. “This shall continue until the number of passport applicants will fall back to normal,” Aryal told Republica. “We want to ensure that none of these passport applicants will have to face any kind of difficulties.”

When asked why the Ministry of Foreign Affairs did not distribute passports in the districts, Aryal said that the ministry did think about it but couldn't execute it because of some policy level issues and some technical problems. “Fastening the process of making passport in districts is not something that can be done overnight. It requires a serious homework and takes time for its execution,” he said.

DENVER, Oct 28: The United States has issued its first passport with an “X” gender designation, marking a milestone in... Read More...