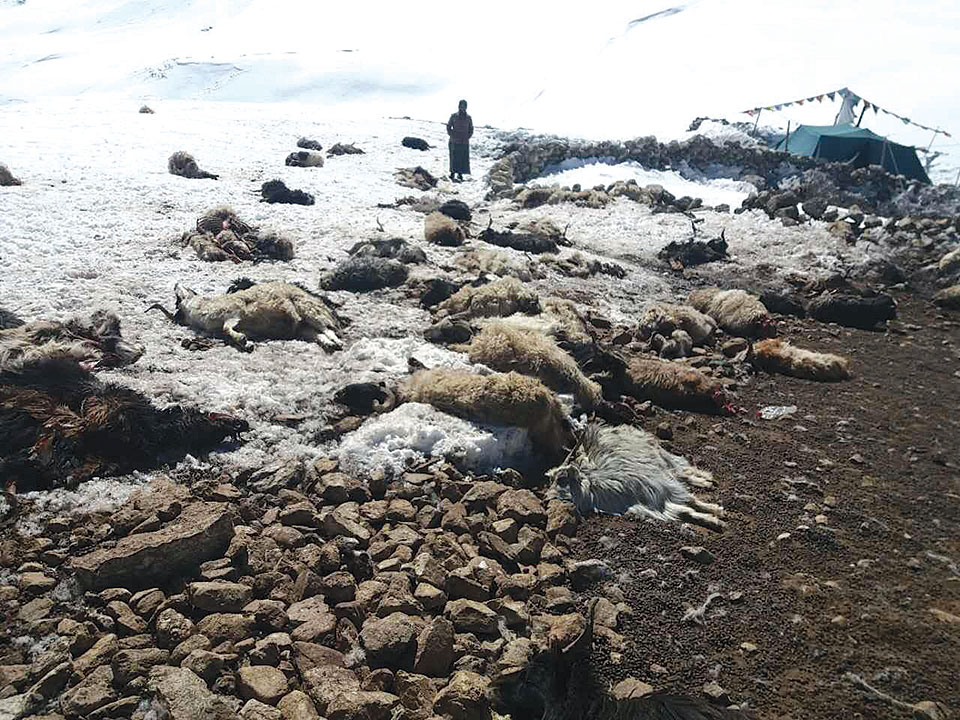 Farmers are eligible for 75% subsidy on premiums on livestock insurance; Mustang farmers get additional 12.5% subsidy from ACAP

POKHARA, March 14: It has been revealed that not a single animal which perished during a heavy snowfall in Mustang few days ago was insured.

As the livestock were not insured, farmers will suffer huge financial losses, government officials say. Many farmers have now realized the importance of livestock insurance, they added.

As many as 1,900 animals starved to death in Upper Mustang as the pasture-land was covered by deep snow for over six weeks.

The death rate was high in Chumjung of Lo Manthang Rural Municipality were some animals lay buried under the snow.

Pasang Gurung, who has more than 200 mountain goats in his farm, has now realized the importance of getting livestock insured. “We were aware of livestock insurance and have also attended trainings and orientation on the importance of insurance. But most of us forgot about it once we were in the highlands,” Pasang, who lost a few baby goats in the snowfall, told Republica. He added that none of the farmers in the highlands of Mustang insured their animals.

“Albeit late, we have now realized how important insurance is for farmers,” Pasang said, adding: “Farmers may have been discouraged as we have to go all the way to Jomsom to buy insurance coverage.”

Deputy Chief District Officer of Mustang Bishweshwar Regmi confirmed the death of about 1,900 animals due to starvation. “In total, 1,466 mountain goats, 358 yaks, and 40 cows died as their pasture-land remained covered under snow for weeks,” he added. “Not a single animal was insured.”

According to Regmi, local farmers increased their investment in livestock farming due to low snowfall in previous years. “But heavy snowfall this year spelt disasters for farmers,” Regmi added.

The local administration believes some livestock are still buried under the snow.

The affected area lies under the Annapurna Conservation Project (  has set aside Rs 525,000 to compensate farmers for loss of livestock and crop due to activities of wildlife. The project had intended to spend the amount to pay 12.5 percent of the livestock insurance premium.

“The amount was allocated to pay 12.5 percentage points of the 25 percent premium that farmers have to pay. But nobody came to apply for the subsidy,” Tulasi Dahal, section officer of ACAP Office in Jomsom, told Republica.

ACAP and Agricultural Development Bank organized an awareness event on importance of livestock insurance for farmers in June 2018. Though many farmers attended the event, not a single farmer bought insurance policy.

As per the livestock insurance regulations, farmers get 90 percent of the insured amount as compensation. This means farmers would have received Rs 72,000 for each dead yak.

President Bhandari emphasizes on role of law education for promotion of rule of law
10 minutes ago
Rs 10,000 fine slapped on Rajpur's mayor for not providing information
25 minutes ago