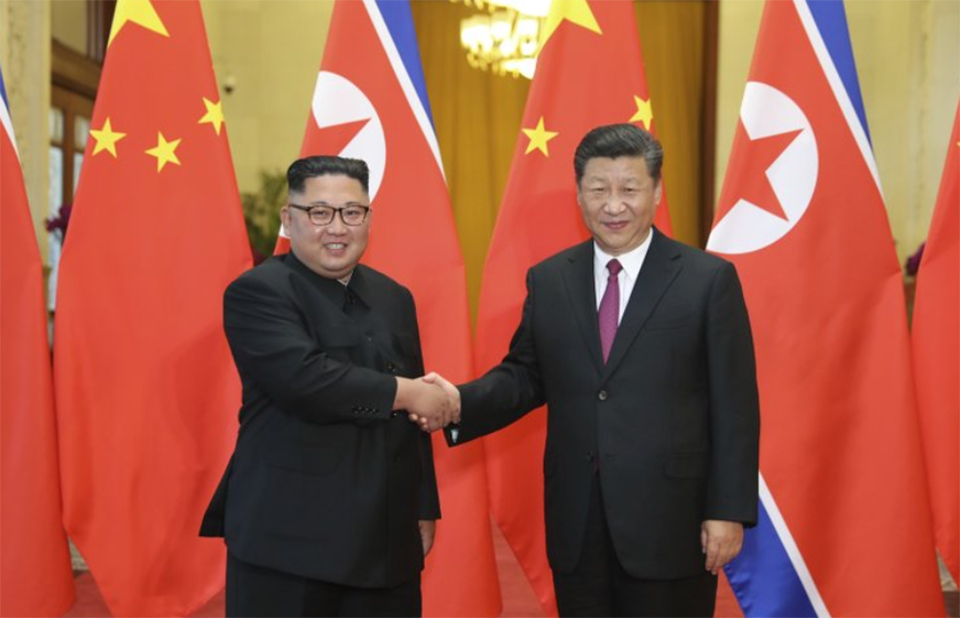 The Korean Central News Agency said the leaders reached “shared understanding” on the issues they discussed but the report did not give any specifics on the stalled nuclear negotiations between Washington and Pyongyang over disagreements in exchanging sanctions relief and disarmament.

“The supreme leaders .... broadly exchanged their opinions on the political situation of the Korean Peninsula and other serious international and regional issues,” the KCNA said. They assessed that deepening their relationship was in line with the “mutual interest of the two countries in face of serious and complicated changes in the environment and would be favorable for the region’s peace, stability and development.”

Chinese state media earlier reported that Kim told Xi he is waiting for a desired response from Washington and the U.S. should meet North Korea halfway to “explore resolution plans that accommodate each other’s reasonable concerns.”

Xi said his government is willing to play a constructive role in the denuclearization of the Korean Peninsula. “The international community expects the U.S. and North Korea to continue to talk and achieve results,” he said, according to Chinese state broadcaster CCTV.

Xi and Kim attended a dinner reception and a mass games performance later Thursday, the reports said. Xi later Friday concludes the first visit to North Korea by a Chinese president in 14 years.

He is expected to meet with President Donald Trump next week in Japan and could pass him a message from Kim about the nuclear negotiations.

Xi’s two-day state visit to North Korea, announced just three days ago, began with the synchronized pomp of all major events in the country.

About 10,000 cheering people and a 21-gun salute greeted Xi and senior Chinese officials at an arrival ceremony at Pyongyang’s airport.

The CCTV evening news showed Xi and his wife, Peng Liyuan, waving to the crowd after emerging from their Air China plane, then being greeted by Kim and his wife, Ri Sol Ju, before receiving flowers and watching goose-stepping troops march by.

The crowd stood in tight formations, waving flowers and chanting slogans to welcome Xi. Other people lined the roads and cheered from overpasses as Xi’s motorcade traveled to central Pyongyang, where he joined Kim in an open-top vehicle.

They waved to crowds as they rode to the square where the embalmed bodies of Kim’s grandfather and father, the first two leaders of North Korea, lie in state.

Nuclear talks between the U.S. and North Korea broke down after the failed summit between Kim and Trump in February in Vietnam.

The U.S. is demanding that North Korea abandon its nuclear weapons entirely before international sanctions are lifted. North Korea is seeking a step-by-step approach in which moves toward denuclearization are matched by concessions from the U.S., notably a relaxation of the sanctions.

“Over more than a year, the North Korean side has taken many positive measures to avoid escalation of the situation and manage and control the peninsular situation, but it hasn’t received an active response from the relevant party,” Kim told Xi on Thursday, according to CCTV.

Xi was expected to endorse North Korea’s calls for an incremental disarmament process.

A commentary in China’s official Xinhua news agency said China could play a unique role in breaking the cycle of mistrust between North Korea and the U.S, but that both sides “need to have reasonable expectations and refrain from imposing unilateral and unrealistic demands.”

Kim met Xi four times in China before the Chinese leader made his first trip to Pyongyang since taking office.

Home Minister for safe handling of international airport
13 hours ago

Rapist sent to 18 years in prison
13 hours ago

EXPLAINER: What’s known about ‘stealth’ version of omicron?
14 hours ago

Cabinet meeting: Japan's grant of up to Rs 2.61 billion accepted
5 hours ago