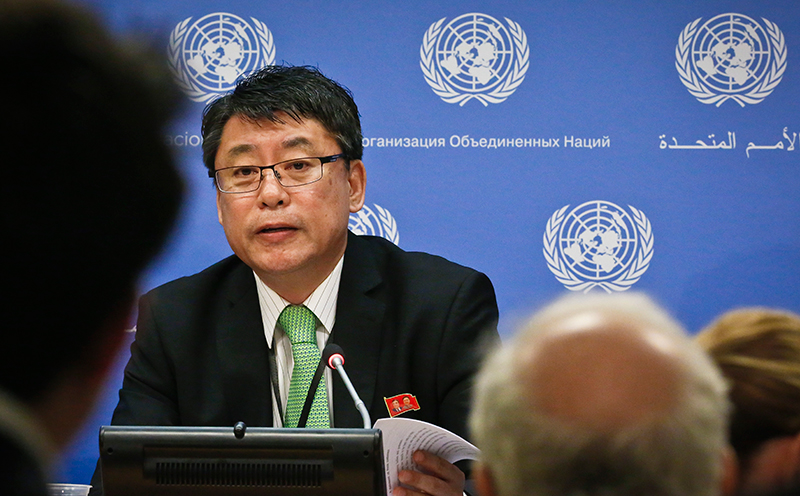 UNITED NATIONS, March 14: North Korea on Monday tried to shift the blame for the deadly attack in Malaysia on the estranged half- brother of its leader Kim Jong Un to the United States and South Korea.

North Korea's deputy U.N. ambassador, Kim In Ryong, told a news conference that "from A to Z, this case is the product of reckless moves of the United States and South Korean authorities," who he said are trying to tarnish the North's image and bringing down its social system.

Malaysian authorities say Kim Jong Nam died after two women smeared his face with the banned VX nerve agent at Kuala Lumpur's airport on Feb. 13, but North Korea — which is widely suspected to be behind the attack — rejects the findings.

Ambassador Kim said the cause of Kim Jong Nam's death "has not yet been clearly identified, but the United States and the South Korean authorities are groundlessly blaming the DPRK," using the initials of the North's official name, the Democratic People's Republic of Korea.

Malaysian authorities have identified the victim as Kim Jong Nam, though he was using a North Korean passport under the name Kim Chol. The ambassador, like other North Korean officials, referred to him only as Kim Chol and did not say he was Kim Jong Un's half brother.

He asked why the person who applied the VX agent, which is fatal if a tiny amount is inhaled, is still alive while the man it was applied to died.

The ambassador asserted that the U.S. is one of the few countries that can manufacture VX and that it has stockpiled chemical weapons in South Korea, which could have provided the chemical agent for the attack on Kim Jong Nam.

"It is a final aim sought by the United States to store up the international repugnancy towards the DPRK," he said of the attack, with the intention of provoking a "nuclear war against DPRK at any cost."

"So the U.S. and South Korea were starting the political chicanery to bring down the social system in DPRK," the ambassador said.

He said the DPRK will respond by continuing to bolster its defenses "and the capability for the pre-emptive strike with a nuclear force."

The North Korean envoy held a press conference at U.N. headquarters in New York after the DPRK boycotted a meeting of the U.N. Human Rights Council in Geneva, which was addressed by its special investigator on human rights in the reclusive northeast Asian nation.

"Military tensions have brought human rights dialogue with the DPRK to a standstill," he said.

The council report was the first by Ojea Quintana, who is from Argentina, since he took the post last year.

He also pointed to concerns about the "human cost of sanctions" by the U.N. Security Council that have aimed to block North Korea's access to ballistic and nuclear weapons technology.

Ambassador Kim reiterated the DPRK's claim that the six progressively tougher sanctions resolutions imposed after the North's nuclear and missile test are illegal.

He accused the U.N. Secretariat of failing to respond to a DPRK request nearly three months ago to organize a forum of legal experts to clarify the legal grounds for the sanctions resolutions.

Kim reiterated claims that the United States and South Korea are conducting joint military drills "for a real war aimed at a pre-emptive nuclear strike against the DPRK by mobilizing lots of strategic assets and armed forces."

The ambassador was asked at the press conference whether the DPRK was open for talks with the Trump administration, either bilaterally or through a resumption of the six-party nuclear disarmament talks which have been stalled since 2009.

Kim didn't reply but sent the mission's spokesman Jo Jong Chol out afterward to say: "We are not interested in any kind of talks ... which is aiming to make the DPRK to abandon its nuclear program."

"We regard the lifting of the (U.S.) hostile policy toward the DPRK is the fundamental issue to address all kinds of issues ... between the two countries," Jo said.