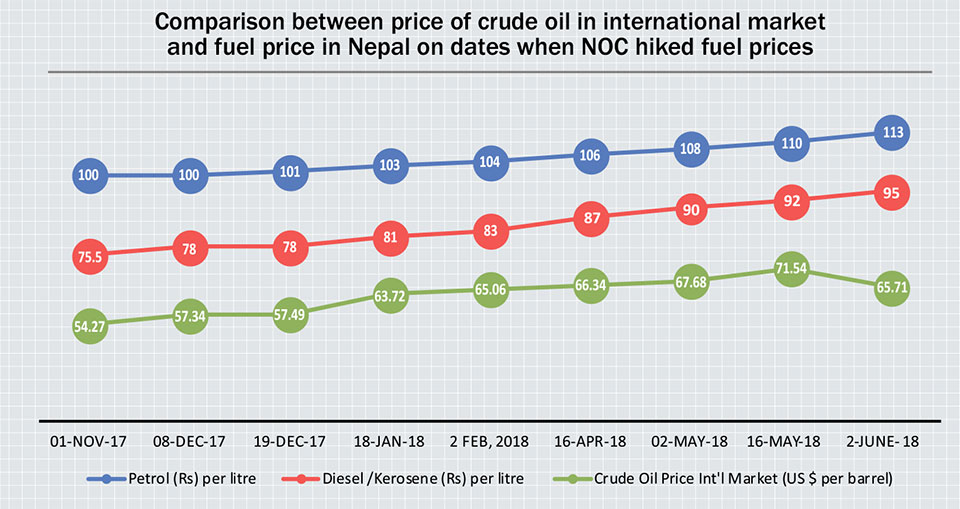 KATHMANDU, June 5: Nepal Oil Corporation has hiked fuel prices regularly under an automatic pricing mechanism in the last seven months. The steady price hike has impacted the price of daily commodities, and airfares are also to increase by Tuesday. NOC’s latest price hike comes against a fall in international prices.

Consumer activists claim that the price hike is the result of collusion between officials of NOC and the Indian Oil Corporation, the sole supplier of fossil fuels to Nepal.

NOC has hiked fuel prices effective from Sunday by Rs 3 per liter for petrol and diesel/kerosene.

Fuel prices in the Nepali market have seen a continuous rise since November. Prices of diesel and kerosene, which hovered in a Rs 74 to 75 range in early November, have jumped by nearly 30 percent in the past seven months to Rs 95. Likewise, petrol has soared by 15 percent in the past six months to Rs 113. Moreover, the price of air turbine fuel (ATF) used in domestic flights has increased by nearly 15 percent to Rs 100 since early December. ATF for international flights has increased by nearly 27 percent to US$ 1,075 per 1,000 liters in the same period.

Talking to Republica, Bishnu Timalsina, general secretary of the Forum for Protection of Consumer Rights, said that the abrupt price hike is unnatural. “It seems there is collusion between the Indian Oil Corporation and NOC in the artificial price hike in Nepal though the price has remained the same or even fallen in recent weeks. However, he did not elaborate.

Timalsina also blamed the growing use of LPG for commercial purposes, resulting in greater losses for NOC, which transfers this loss to the general consumer by hiking the price of other fuels. LPG has seen price hikes only twice, from Rs 1,325 to Rs 1,350 and again to Rs 1,375.

NOC officials tried to appear clean by referring to Indian Oil price rates which are received every 15 days. Birendra Goit, spokesperson of NOC, said, “We have increased the price of fuel based on the price list provided to us by Indian Oil.”

BARDIYA, April 6: A man had disappeared after falling into the Karnali river while taking a selfie at Rajapur in... Read More...