No records of students returning from abroad 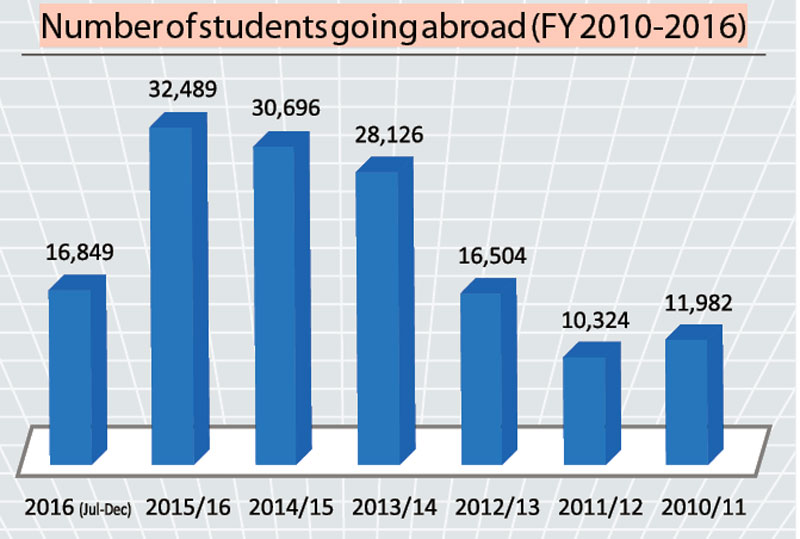 Only 30 pc pursue their academic courses abroad
KATHMANDU, Jan 24: A total of 146,870 students were issued no objection letters (NOC) starting from fiscal year 2010/11 to December 15, 2016, permitting them to go  abroad for higher studies. Besides, hundreds of students go to India each year without any LOC as this is not compulsory for study in India.

However, the government has done nothing yet to maintain records of students who have returned to Nepal after going abroad for study.

The government has no records on how many students return to the country after studies abroad or what they do in foreign countries. Neither MoE nor the Ministry of Foreign Affairs (MoFA) has done anything yet to compile details of the Nepalese students abroad and their status in the foreign countries. The Non-Resident Nepalese (NRN) Association also has no such reconrds.

The government only has records on students seeking to go abroad, said Dr Hari Prasad Lamsal, spokesman at  MoE. “We have not been able to track the status of Nepalese students abroad and whether they are studying or working after having left the country,” he added.

The government recently started maintaining records of medical students going abroad under government scholarships. Some of them return to the country as per the regulations while many others get permanent residency status abroad.

The government has neither developed a policy for retaining the students who have studied abroad nor has it made any efforts to maintain  comprehensive records, said Prof Dr Biddhya Nath Koirala, an education expert. “Going abroad for study may be good for acquiring knowledge and skills but this is questionable in the case of about two-thirds of the students,” he added.

Citing a survey carried out in 2016, Prof Koirala informed that only 30 percent of students going abroad for study pursue their academic courses. “Rest do not study but start working to make money,” he said

“Many don't want to come back and the government has done nothing to provide them prospects for using their skills,” said Koirala. “We need to identify the experts in agriculture, medicine, hydro, tourism, forestry, engineering, planning and management to tap their potential for the development of the nation.”

KATHMANDU, Aug 1: The Ministry of General Administration (MoGA) has asked all the ministries to provide details of civil servants... Read More...