No end to ‘slavery’ in some Madhes communities 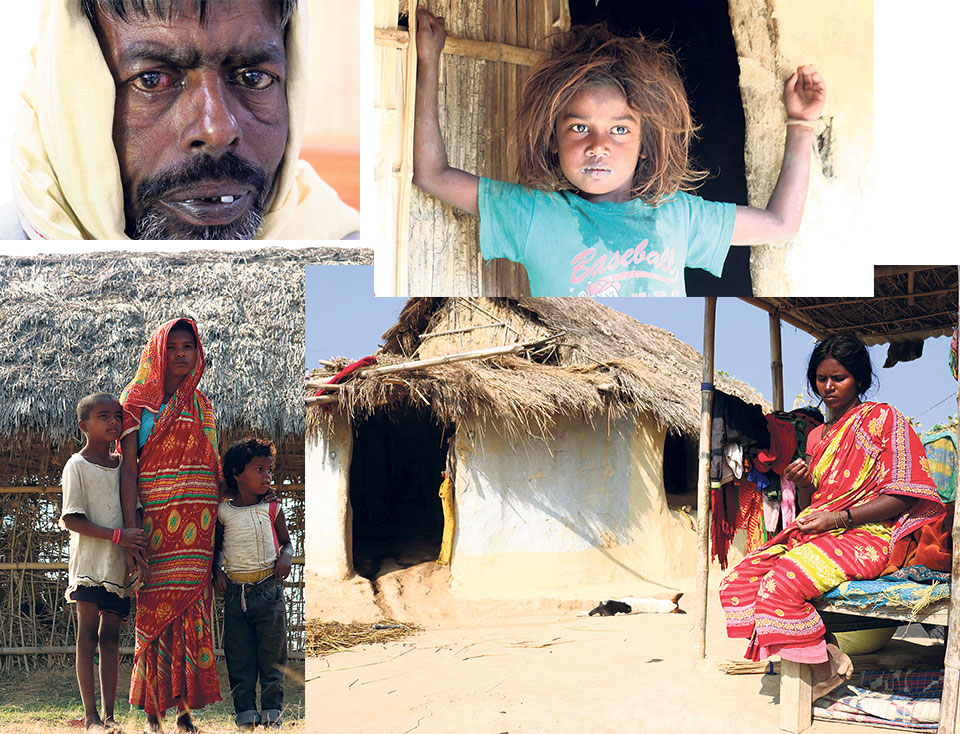 People of the Sada community in Saptari district in this recent photo. Photo : Upendra Lamichhane

SAPTARI, Dec 29: Ram Dev Sada was not even 10 years old when he started working for landlords. He is 70 now. And life has not changed much for him. Neither he has a house in his name, nor any plot of land.

“I worked for landlords for six decades. In those years, they gave me food to eat and place to live in. Today, I am old and unable to work anymore. After so many years of hard work, I wasn’t able to make my own home. Now in my twilight years, I don’t even have a shelter,” he lamented.

After he turned too feeble to work in the fields, his landlord stopped looking after him. Not just that, he is now under pressure to move away from the hut where he is taking shelter.

“They say that’s not my land, so I cannot occupy it.”

Sada’s hut size is no bigger than 10 square feet. But landlords are not kind enough to let him continue living there.

“Where shall I move now?” asks the old man who has a wife but no kids.

His wife Geeta Devi Sada says she is just 40. But she looks much older. Hard life might have taken toll on her youth.

“Life always remained very hard. There was never a moment that passed in comfort,” Geeta Devi says.
It is not a story of just two of them. There are dozens of people in the Sada community who worked as ‘haruwa/charuwa’ at their landlords house, and were discarded once they grew old.

“We had the same routine in life since our childhood till old age. We lived the same kind of life. We worked for the landlords,” Geeta Devi explained.

The lives of the people from the Sada community are more pathetic than the Kamaiyas or the bonded laborers, who were freed by the government after the abolition of the Kamaiya system in 2000.

Many schemes were introduced to help the bonded laborers restart their life in a better way. While there are mixed reports about how Kamaiyas are doing, similar community in the plains lament that they have not been given due attention.

“Though the country saw many political and social changes, our stars never changed. We always remained slave,” Geeta Devi stated.

There is a trick landlords use to enslave those people for lifetime. The poor people ask for loans. They hardly realize while taking loans that they would never be able to repay the debt in their lifetime due to the massive interest rates. Even if they do, they have no option during emergencies.

“Urgency forces us to take money from those well off people, and paying the loan never comes to an end,” Geeta Devi explained.

Fooling innocent people and claiming all their property was not a big deal for rich families. Though the society has embraced many changes in the recent years, some marginalized communities in Madhes continue to live from hand to mouth.

“The constitution is not for us. Federalism has not addressed our plights,” Geeta Devi said.
Apart from oppression by higher-caste people in the society, Sada families have been hit hard by tradition and superstition. Due to the lack of education and awareness, they torture their own people.

“There are no educated people in our community, so many wrong things are in practice,” Geeta Devi states.

In the recent years, awareness campaigns on Haruwa/Charuwa are being organized. But they are yet to get proper attention, according to Darsahn Mandal, 48, who has been leading the movement.
“We are ill treated in the society. We are not given our rights. We are getting united and fighting against this, but more effort should be put on to bring about a change,” Mandal said.

According to Mandal, right to land and dignified life is what the poor communities are fighting for. “And until the government listens, the struggle will go on.”