No Dog Tihar for strays 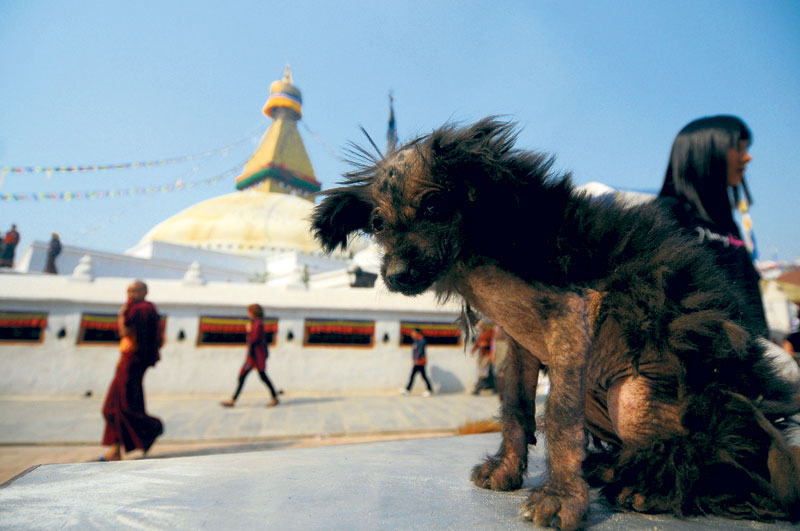 A stray dog on the premises of the Bauddhanath Stupa in Kathmandu. (Keshav Thokar/ Republica)

KATHMANDU, Oct 29: While the country observes Kukur Tihar Saturday in celebration of the dog, the plight of street dogs in the capital and other cities remains largely ignored.

Although dogs are widely appreciated as man's best friend, the strays roaming the streets of Kathmandu Valley and elsewhere suggest otherwise as many of them suffer cruel treatment at the hands of humans. Many of them do not get the care they deserve, according to Pramada Shah, president of Animal Nepal, an organization that works for animal welfare.

“Street dogs frequently suffer cruel treatment from humans, and as they live in the streets, they are often hit by moving vehicles, sometimes deliberately," she said, adding that they do not just suffer from illness and disease but are also prone to severe injuries resulting from widespread animal cruelty. Many street dogs live with severe spine injuries, she also said.

Data maintained by Kathmandu Metropolitan City (KMC) shows that there are around 22,000 stray dogs in Kathmandu alone, and KMC and various organizations working for animal welfare are making commendable efforts to improve their situation. However, the general observation is that not enough has been done to end cruelty against dogs.

Hari Kumar Shrestha, chief of the Public Health Division at KMC, said they have been carrying out medical treatment and vaccination for the strays. “We also perform spay surgery to keep the numbers in check as their growing population has been a big problem,” he added.

“Our culture and our conscience do not allow cruelty towards helpless animals," she observed and called for united efforts if there are to be results.

In Hindu culture, the dog is considered a messenger of Yamaraj, the god of death,  and it is offered worship as such on the second day of Tihar, the festival of lights. The dog is also acknowledged for its loyalty and friendliness toward humans.

“Let's not extend special treatment to dogs only in Tihar, as they should be treated with fairness throughout the year also, " Shrestha said, suggesting that even a small act of kindness, such as feeding them whenever possible, can make a huge difference.”