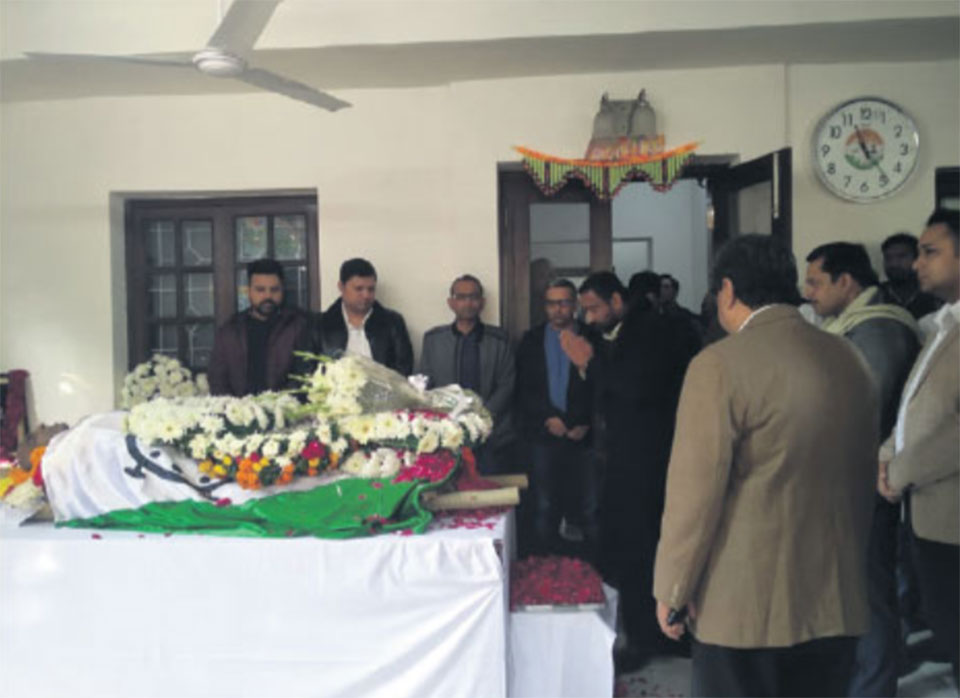 A Central Working Committee (CWC) meeting of the NC on Thursday had decided to send Vice President Nidhi on behalf of the party to New Delhi to pay homage to late Tripathi, who always stood in favor of Nepal even when Nepal and India experienced troubled relations. The CWC meeting had also passed a condolence note on the demise of Tripathi.

Along with Nidhi, NC lawmakers Pradip Giri and Binod Chaudhary also paid last homage to late Tripathi at the NCP's Head Office at Ravi Shankar Shukla Marg in New Delhi and participated in the funeral ceremony held at Lodhi Road later in the afternoon. Ambassador of Nepal to India Nilamber Acharya had also joined the team of NC leaders in paying last homage to Tripathi.

Late Tripathi, who passed away on Thursday after prolonged illness at the age of 67, had a direct one-to-one relation with all top leaders of major political parties in Nepal. Talking to Republica from New Delhi, Nidhi recalled his close relation with Tripathi and his support during the political struggles in Nepal to restore democratic system during Panchayati regime.

Known as a great socialist leader of India, Tripathi emerged from anti-emergency movement during Indira Gandhi's rule and stood for social democratic values not only in India but also in Nepal. Tripathi stood for the cause of Nepal democracy restoration movement in 1990, movement against King Gyanendra Shah's direct rule in 2005 and during the blockade imposed by BJP-led government in India in 2015/16.

No factionalism in NC, Nidhi claims

DANG, Sept. 29: Nepali Congress vice president Bimalendra Nidhi has claimed that there was no factionalism in the party. ... Read More...