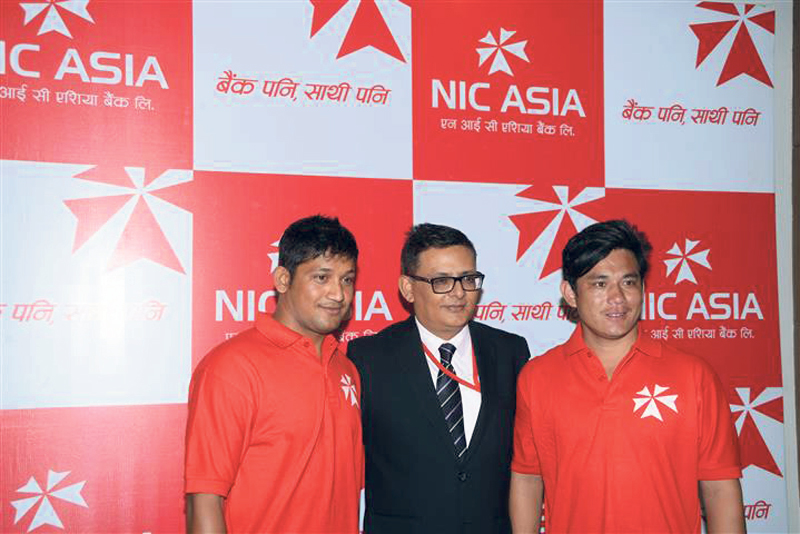 Cricketers Raju Rijal (L) and Prem Tamang (R) pose for a photo with NIC Asia Bank CEO Laxman Rijal after the players were awarded two-year scholarship in the capital on Thursday. ( Republica )

Laxman Risal, the CEO of the Bank and the players inked the agreement amid a program at the bank’s corporate office in Thapathali. Besides the monthly stipend, the players will be also provided with cricket kits.

The agreement between the players and bank was initiated by Cricket Players Association of Nepal (CPAN) which consists of current and former national cricket players.  The scholarship was channelized through NIC Asia Foundation, a CSR subsidiary of the bank.

Speaking on the occasion NIC Asia CEO Risal said that the scholarship will help the players focus on the game. “Cricket has given lots of happiness to public. But many players are forced to leave the game in the mid of their career due to various problems despite having lot of potential. Thus we provided these scholarships so that they can focus on the game,” he said.

The bank has not set any conditions on the players rather than has asked them to adhere to the players’ code of conduct.

Paras Khadka, the general secretary of CPAN and the national team skipper expressed happiness over the support provided to the players. “The game will develop only if the corporate sector joins hands with players. We will work together with more corporate actors in the future,” Khadka shared.

Both the players thanked the bank for offering the scholarship and vowed to focus on their game. “We will try to perform even better in the future,” Prem said.

In July, cricketer Sandeep Lamichhane was offered similar scholarship by Sanima Bank under the initiation of CPAN.