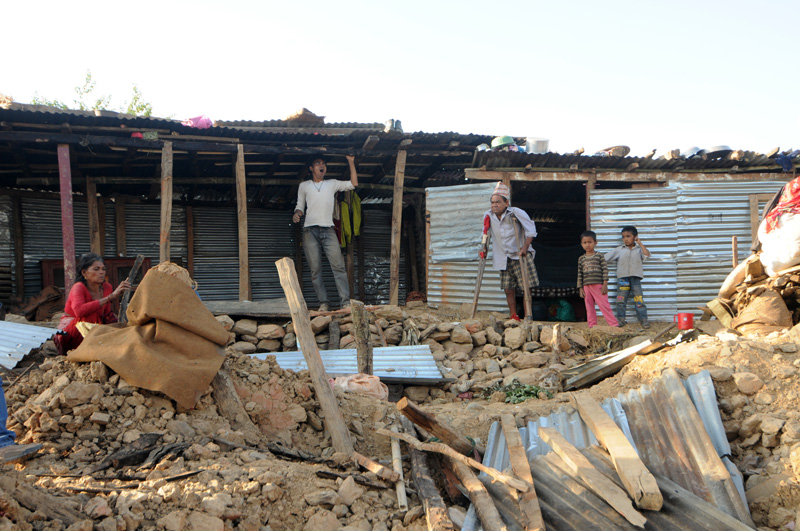 KATHMANDU, June 19: Having no land to their names, as many as 102 earthquake-affected families in Naubise of Rasuwa district have been forced to set up temporary shelters in a rented land since last year's devastating earthquake. The families of daily wage earners have been paying monthly rent ranging from Rs 1,000 up to Rs 2700 just for using the land.

And from mid-August, when the monsoon will be at its peak, they may not even have the temporary shelters to live in as the land owner has asked them to vacant the land.
“We found that the government simply does not seem to care about their plights,” Govinda Sharma Poudel, member of the National Human Rights Commission, said, sharing an account of the filed visit made by the NHRC on his leadership of the four most-affected quake-hit districts--Gorkha, Nuwakot, Dhading and Rasuwa.

He said that a big plot of public land lies nearby the land rented by the quake-hit families but the government has done nothing to shift them even after 15 months of the disaster.
“If they have to vacate the rented land by mid-August and no alternative place is arranged for them, they will literally be rendered homeless. If this will happen, a large number of children, people with disability, senior citizens and women are going to be severely affected,” Poudel said.

He said that the basic human rights of the quake victims, especially elderly, children, disabled and women living in temporary shelters in the quake-affected districts are in danger even after 15 months of the disaster. “We have found that the quake victims living in temporary shelters are still deprived of basic human rights like shelter, water and sanitation among others,” he added.

He warned that that there will be another humanitarian crisis if their basic human rights are not ensured immediately.

The field visit by the NHRC has found that majority of the quake-victims still living in temporary shelters are experiencing lots of hardship and risk.

Likewise, the NHRC team found that a large number of quake victims whose houses were completely damaged by the earthquake and therefore eligible for the grant amount have been left out from the grant distribution process.

“We found that the survey for the grant distribution has not been carried out in dozens of villages in the four districts. As a result, a large number of quake victims have been left out,” Poudel said.

Likewise, the commission has asked the government to ensure basic human rights for earthquake victims by providing essential services to them.

The commission has also observed of lack of coordination among government agencies including National Reconstruction Authority (NRA), District Disaster Relief Committee and District Development Committee that has caused inefficiency in reconstruction works.