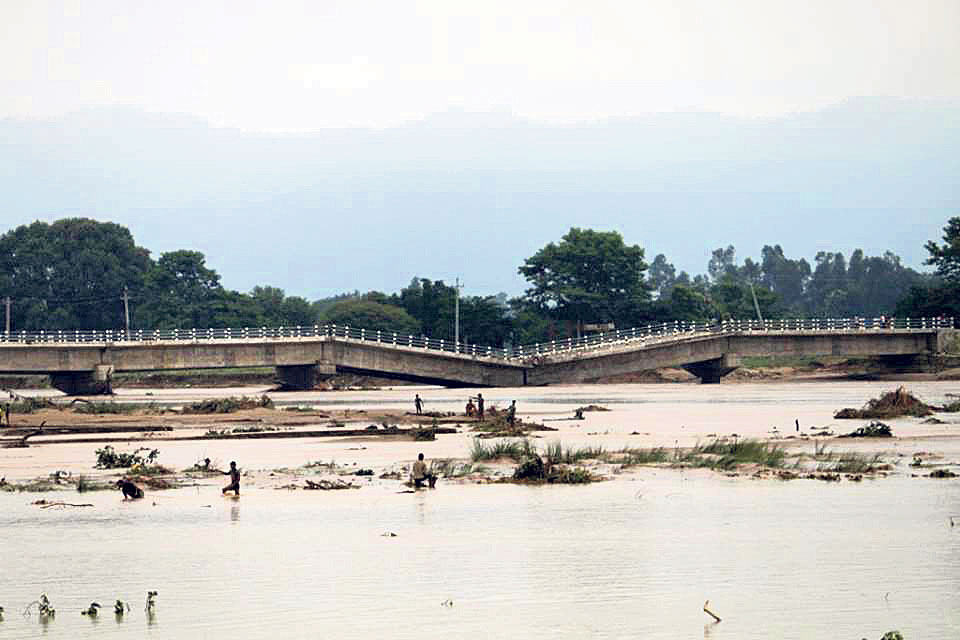 KATHMANDU, August 15: Jabdighat Bridge over the Babai River in Bardiya district has collapsed following the flooding on Monday.

One pillar of the 425-meter bridge has collapsed, calling into question the quality of the construction work, said Daya Kant Jha, spokesperson of the Department of Roads (DoR).

“Damage has been minor at  a dozen bridges along the five-decades-old East-West Highway but the Jabdighat bridge built only a year ago has suffered major damage," lamented Jha.

The bridge built by Pappu Construction Pvt Ltd was opened to traffic a year ago  but it has not yet been formally handed over to DoR.

With the bridge unusable, Magargadhi, a community of some 500 households, has been cut off from district headquarters  Gulariya.

The handover of the bridge to DoR was delayed after the National Vigilance Center found that no gabion wire had been used for river training as required and questions had also arisen over the quality of the approach  road, according to DoR officials.

Ayodhya Prasad Shrestha, regional director of the Mid-Western Regional Roads Directorate, said  the bridge is not yet under the ownership of the government and the damage should be borne by the contractor.

“An investigation will be carried out to pinpoint flaws in the bridge design and the quality of the construction work,” said Shrestha.

Construction of the bridge started in  fiscal year 2010/11. The contractor's website says that it has already built 10 bridges in the country, including a bridge over the Kankai river at Ratuwa and the Balan bridge at the boarder between Siraha and Saptari districts.

16 dead, others feared trapped after bridge collapses in India

NEW DELHI, May 16: At least 16 bodies have been recovered from the debris of a flyover that collapsed in the... Read More...

KAWASOTI, Dec 11: A bridge over Baulaha river at Devchuli – 12 of Nawalparasi along the East-West Highway collapsed this... Read More...

Remembering Osho on his Mahaparinirvana Day
12 hours ago

Himalaya Airlines carries out test flight to Lhasa
9 hours ago

India vaccine developer warns some to avoid shot
8 hours ago

Himalaya Airlines carries out test flight to Lhasa
9 hours ago

Remembering Osho on his Mahaparinirvana Day
12 hours ago