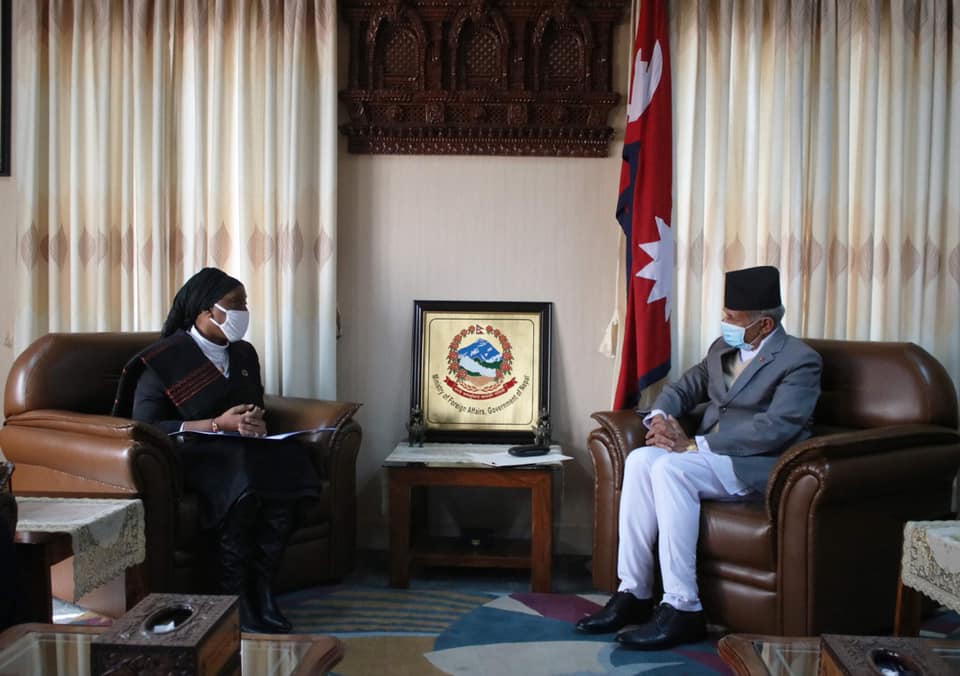 “I am truly delighted to start my tenure as the UN Resident Coordinator in Nepal. This is a crucial time for the UN and the government as it relates to containing the COVID-19 pandemic and ensuring a coordinated response that is not only medical but addresses the socio-economic challenges as well. I am committed to our joined-up efforts to provide immediate and effective humanitarian support to Nepal in relation to not only the COVID 19 response, but to an overall effective emergency preparedness and response system," a press statement issued by the UN Resident Coordinator's Office quoted her as saying after assuming her office.

Nyanti has expressed commitment on behalf of the UN in Nepal to support the government of Nepal and the stakeholders in pushing the envelope to build back not only better, but greener, and differently. "Nepal’s aspiration of graduation from being a least developed country is one that the UN shares, and our support in this area will remain a priority. With the Sustainable Development Goals (SDGs)  at the heart of everything we do, I would like to reiterate the UN in Nepal’s focus on internalizing the SDGs for stronger engagement with provincial and local governments in order to achieve the global agenda with a focus on gender equality,” she has said further.

UN Resident Coordinator Nyanti brings more than 20 years of experience in development and humanitarian work to the position, which she has acquired from assignments around the world with the United Nations and externally. Within the organization, she most recently served as Representative of the United Nations Children’s Fund (UNICEF) in Yemen, where she set up programs that provided cash assistance to nine million people, after occupying a similar position in The Gambia.

Nyanti also held leadership positions across the United Nations in Jordan, Namibia, Nepal and Nigeria, working in multiple sectors and agencies on key issues such as Ebola response coordination.

Prior to joining the United Nations, Nyanti worked as her country’s Director of the National AIDS Control Program in the health ministry. She authored the first Global Fund for AIDS, Tuberculosis and Malaria funding for Liberia’s national AIDS response and led the development and subsequent legislation of the national AIDS policy, guidelines and law.

Unity with KP Oli is next to impossible: Madhav Nepal
14 hours ago

KP Oli thinks he is a king: Dahal
18 hours ago

Unity with KP Oli is next to impossible: Madhav Nepal
14 hours ago

Parties will forge an understanding: Speaker Sapkota
15 hours ago

NCP’s legitimacy row to be resolved at the earliest: Election Commission
16 hours ago
National Youth Council chairs appointed in 71 districts
17 hours ago